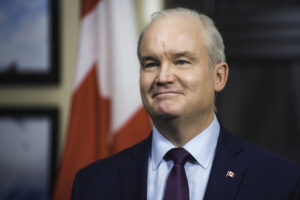 TORONTO – Erin O’Toole’s leadership in the Conservative Party is shaky more and more. If in recent weeks the signs of discontent within the party, the discontent of the base and the dissatisfaction of a part of the Tory ruling class had emerged sporadically and disjointedly, now we are facing an open rebellion launched by those who want the leader’s head.

The gauntlet was officially launched by Senator Denise Batters through a petition asking to give back the floor to the members for the reconfirmation of O’Toole before the next national convention, which is scheduled for 2023. This is too long a period of time for the rebel conservatives who are organizing around the senator from Saskatchewan: by that date, in fact, since the Trudeau executive is a minority government, Canada could be close to early elections and would therefore lack the time necessary for the Conservatives to give themselves a new credible leadership in competition with the current prime minister for the leadership of the country. No – this is the reasoning of the discontented – the change at the helm of the party must be a painless operation and done as soon as possible, taking into account the liberal executive cannot count on an absolute majority in parliament and therefore, consequently, continues to be at the mercy of the moods of the opposition. We need a new leader and we need it now.

In any case, at least for now, there are no other parliamentarians who have openly sided against O’Toole, who despite the blow in the last elections has no intention of renouncing the leadership of the party.

There are, however, numerous critical positions, which have been put forward within the Conservative parliamentary group and which have forced O’Toole himself to launch an official review of the conduct of the Tory leadership during the last election campaign: the stated objective is to identify the strategic errors that led to the defeat at the polls. Too little too late for the rebels, who would like to speed up the process of analyzing the defeat and draw the main consequence, pointing the finger at what they believe is the main culprit, the current leader.

There are so many mistakes and naivety that are attributed to O’Toole and that led to the electoral collapse: the attempt to move the party towards the center in numerous issues to win votes in the GTA and in other metropolitan areas of the country, an approach that not only did not bring the desired results but that has, on the contrary, disgruntled the conservative electorate in traditionally Tory provinces, such as Alberta and Saskatchewan. In addition to this, O’Toole is accused of having underestimated the presence of a second right-wing party, maxime Bernier’s People’s Party, which instead had an excellent result – in the popular vote, not in the conquest of seats – in the last elections. Without forgetting the inability of the conservative leader to take full advantage of the difficulties of Trudeau who, starting with the favors of the prediction, lived in August two weeks of collapse in voting intentions, only to recover after the two television debates.

Finally, many conservatives have not digested the leader’s hard fist against internal dissent, from the request to send O’Toole’s entourage all the emails and phone records related to a first petition – launched by the National Council – against his leadership to the indefinite suspension of those who had launched that petition.

Now, however, the clash moves to another level. O’Toole has no power over his senators, who remain in office regardless of the leader and who do not have to face the caudine forks of elections and nomination procedures in individual districts.