Ottawa, the investigation into the use of the Emergencies Act begins Thursday 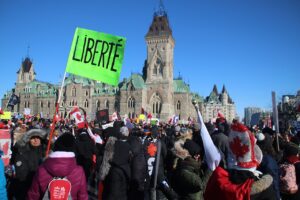 TORONTO – Prime Minister Justin Trudeau and so-called “Freedom Convoy” protest organizer Tamara Lich are among those who will be called to testify later this week in an investigation that aims to shed light on the government’s invocation of the Emergencies Act.

The list of names of all those called to testify before the Public Order Emergency Commission was released yesterday and includes a number of politicians, protest organizers and intelligence officials. “The Commission is about to embark on the public phase of the process in search of answers to the questions assigned to it by Parliament under the Emergencies Act – reads a press release bearing the signature of Commissioner Paul Rouleau – this critical phase will shed light on the events that led to the declaration of the emergency of public order and will fully explore the reasons given for the declaration”.

According to the commission, the public hearings will begin Thursday in downtown Ottawa and will last until the end of November.

Over the course of the six-week hearings, the commission will hear more than 60 witnesses from a list that includes high-profile protesters, law enforcement, cabinet ministers and people on whom the occupation has impacted. During this time, the commission will analyze the government’s justification for invoking the Emergence Act.

By resorting to this law on February 14, the government granted the police temporary extraordinary powers “in order to help law enforcement evict protesters from downtown Ottawa” as well as “freeze the bank accounts of some of the people involved.”

The controversial decision came after three weeks of protests, during which trucks occupied the streets of downtown Ottawa, with protesters honking their vehicles and disrupting the daily lives of residents. Similar demonstrations have clogged several border crossings across the country. “I am confident that, with the cooperation of all parties, the hearings will provide a fair and comprehensive trial for the presentation of the necessary evidence so that the Commission can provide the public with the answers to which it is entitled,” Rouleau said.

The list of witnesses includes Zexi Li, a resident of Ottawa, who is the main plaintiff in a class action seeking millions of dollars in compensation for the inconvenience caused by the convoy’s presence. Ottawa city councilors and Mayor Jim Watson were also called to testify, as were mayors of border towns that were blocked. Then-Ottawa Police Chief Peter Sloly will also be heard along with numerous other law enforcement officers from the Ottawa Police Service and the Ontario Provincial Police. Ottawa police have been heavily criticized for handling the protests, a backlash that eventually led to Sloly’s resignation.

A number of high-profile organizers were also called to testify, including Pat King, who was targeted for several racist comments he made in videos posted online, as well as Tamara Lich and Benjamin Dichter, the organizers who created a gofundme for the protests that was eventually shut down.

RCMP Commissioner Brenda Lucki and several high-profile intelligence officials, including David Vigneault — who is the director of the Canadian Security Intelligence Service — and Marie-Hèlene Chayer of the Integrated Threat Assessment Centre will be asked to speak to the committee.

The final report must be delivered to the government by February 6.