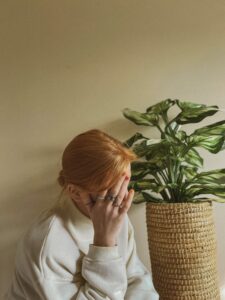 TORONTO – Restlessness, stress and depression are the consequences of Covid-19 on mental health. More than two years have passed since the pandemic began, yet, new data shows that nearly a quarter of Canadians are still experiencing high levels of anxiety, with numbers essentially unchanged since 2020.

The result of two different surveys, the first conducted by Mental Health Research Canada and the second by Maru/Matchbox, came to the same conclusion: despite the fact that more than two years have passed since the beginning of the pandemic, mental illness has remained at the same level as in the first months. To examine the data collected by Mental Health Research Canada were researchers from the University of Waterloo: the study showed that 23% of Canadians suffer from severe anxiety while 15% suffer from severe depression. “Before the pandemic, these levels were around four or five percent. It’s a four- or five-fold increase, so it’s worrying,” noted Gustavo Betini, a doctoral student at the University of Waterloo, who has studied the impact of Covid-19 on long-term mental health.

Betini says it is particularly alarming that, even with high levels of vaccination and few remaining Covid-19 restrictions in Canada, rates of anxiety and depression have changed very little since surveys began in April 2020. “It’s surprising to us that these levels… have not changed since 2020, when we started this survey. So, moving forward, this will be a cause for concern – said Betini – one thing we see very commonly is that young people are struggling a little more than the general population. The same goes for women, especially those with young children, health workers and members of the LGBTQ+ community.” A serious situation in itself that is even more serious for those who become infected with the virus and experience symptoms of long-Covid. Among the most frequent symptoms the Public Health Agency of Canada (PHAC) reports fatigue and, in addition to this, the “mental fog”, or memory problems and difficulty concentrating, but also the loss of smell and taste, anxiety, depression and even post-traumatic stress disorders.

The second survey, conducted in April by Maru/Matchbox on behalf of the Canadian Women’s Foundation, found that more than two years after the start of Covid-19, pandemic-related stressors continue to have a disproportionately negative impact particularly on the mental health and careers of mothers. To say that they have reached the “breaking point” – that is, the point at which problems and difficulties seem to become insurmountable and could cause a physical and psychological collapse – is 48% of mothers compared to 39% of fathers.

Last year, the Foundation’s survey found that 46% of moms were reaching the point of greatest difficulty. The 2021 survey also found that 55% of moms were concerned about their physical health, up from 67% this year. “The Canadian Women’s Foundation revised this year’s national survey, and despite changes to pandemic-related protections, the April 2022 survey suggests that circumstances have not improved for women engaged in childcare. Moms suffer a disproportionate impact, especially when it comes to their health and career,” the research found. In addition, 39% of moms say they struggle to keep up with work, a significant increase from 28% in 2021. Nearly half (47%) of women with children also said they found it exhausting to achieve a balance between working and caring for children.

When asked to describe how they feel these days, more mothers than fathers reported feeling anxious, sad and upset.