Peel Police and Halton Police: “He wanted to kill a policeman and he did” 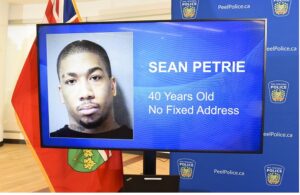 TORONTO – He spent more than two hours at the Tim Horton in Mississauga before pulling the trigger at Andrew Hong, the policeman who unaware of what was about to happen, entered the venue for a quick lunch. There, however, the Toronto police officer who was in Mississauga to give a motorcycle training course at the request of Peel’s police, found death.

At a joint press conference in Mississauga today, Peel and Halton police said Sean Petrie, 40, homeless, was looking for a police officer, any one, to kill. “At this point I believe Hong was targeted because of the uniform he was wearing,” said Detective Michael Mavity. In addition to identifying the suspect, Peel Regional Police chief Nishan Duraiappah provided a detailed timeline of Monday afternoon, an afternoon of ordinary madness.

A killer with a long criminal record in which they were convicted of assault, armed robbery, possession of a loaded or illegal firearm, crimes against property and driving offenses. In March 2007, Petrie was entered into the national reporting system after being deemed a “high-risk repeat offender” for a 2005 crime. Petrie’s last conviction was in 2015. “Investigators spoke to Petrie’s family and learned that he had distanced himself from them, some had no contact with him for a year, others for more than five – said Duraiappah – Monday’s tragedy is an act of horrible violence that should never happen again”.

Duraiappah then reconstructed the stages of the tragic afternoon of bloodshed. In the Tim Hortons in Argentia Road Petrie shot Hong at point-blank range and then tried to remove his firearm from the holster – unsuccessfully. He then crossed the street to a nearby parking lot where he fired at the address of a person from whom he stole the car with which he reached Milton.

Halton police said that less than an hour after the Mississauga shooting, the suspect went to MK Auto Body Repairs in Milton and shot three other people. For the 38-year-old workshop owner Shakeel Ashraf there was nothing to do. And yesterday’s conference revealed that a 28-year-old student who worked part-time in the body shop, who was also injured in the shooting, is dying.

The third victim, a 43-year-old man, who is also an employee of MK Auto Body Repairs, was injured in the leg but his condition does not raise concerns.

What remains obscure is the reason for so much brutal violence: in a couple of hours Petrie killed two people and injured three others and then fell under the blows of the policemen who hunted him down.