Peruvians in Canada await the result of the elections 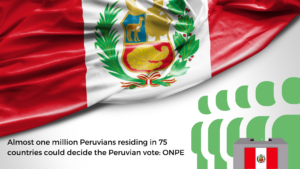 The definition of the 2021 General Elections in Peru will be defined vote by vote. According to the last information from the National Office of Electoral Processes (ONPE), Pedro Castillo, from the Peru Libre party, remains at the top with 50.255% over the 49.745% that represents Keiko Fujimori, from Fuerza Popular, as of June 8th, 2021.

Fujimori is confident that he can come back from the hand of the foreign vote, which little by little is being counted. According to the ONPE, the minutes from abroad will arrive between Tuesday, June 8 and Wednesday, June 9, 2021.

Votes of Peruvians abroad are arriving in Lima in diplomatic bags. In fact, according to the ONPE, electoral bags have been arriving in the last few hours from Spain, the United States and Canada.
The Canadian Peruvian analyst José Bendezú said that “a few hours to know the final outcome of the elections in Peru, citizenship shows some anxiety about how tight the outcome and the consequences that could result from it. It has been a very polarized election, with two very dissimilar government proposals, mainly on the economic issue, but without a doubt, what voters hope most is that the new government will fight corruption, an evil that has eroded almost all the institutions of the government.”

The foreign vote
Almost one million Peruvians residing in 75 countries were called to participate in the second presidential round on June 6 between Pedro Castillo, from the Peru Libre party, and Keiko Fujimori, from Fuerza Popular.

According to data from ONPE, the United States is the country with the highest number of voters, with 309,602 citizens; followed by Spain, with 152,212; Argentina, with 143,189; and Chile, with 117,000.
“Peruvians residing in Canada also went to the voting centers with the hope that this electoral process will mean a real improvement in the lives of the majority of Peruvians who need it so much,” Bendezú said.

The venues where the General Elections were held in Toronto and Winnipeg were The Westin Harbor Castle (1 Harbor Square, Toronto, ON M5J 1A6) and the Honorary Consulate of Peru in Winnipeg (34 Inspiration Place, Winnipeg, Manitoba R2C 3W3) .

Peruvians in Canada who were able to exercise their right to vote abroad for these Elections, must have registered their domicile address in their National Identity Document (DNI), in the provinces of Ontario, Manitoba and Saskatchewan, before April 11, 2020, the closing date of the electoral roll.

Rural vote vs. voting abroad
The electoral dynamics in 2021 have been framed in the delay in the counting of the rural vote compared to urban areas, where Fujimori a priori has greater weight, while Castillo has garnered more support in the most hidden and rural regions of the country, that catapulted him precisely to this ballot.

For her part, the conservative candidate maintains her hopes in the foreign votes that have yet to be counted, which have maintained a favorable trend for her.

Vilma Castro, a 7-year-old Peruvian living 7 years in Toronto, affirmed that the jet set Peruvian politicians bet all their coins on the candidacy of the right-wing Keiko Fujimori, but “some of us do not forget that she is being investigated for money laundering in the Odebrecht Case.”

Of course, the main question is who will be the winner who will rise as president of the Peruvian Bicentennial. Both candidates and Peruvians from the interior and exterior of the country await the answer.