Plane crashes in Milan, eight dead including a child 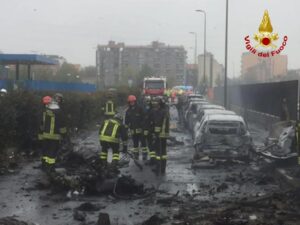 MILAN – A tourist flight with eight people on board crashed, flying over the area of ​​San Donato Milanese, in the province of Milan, Italy. The aircraft caught fire and crashed into an empty building under renovation. Unfortunately, the occupants (8) of the plane all died.

Several crews of firefighters, 118, police and carabinieri are on their way to the scene. Rescuers speak of chilling images from the disaster site. The plane had departed from the private Linate airport and was headed for Olbia, in Sardinia. The flight lasted between 4 and 5 miles.

All eight people died on board the small plane: 118 confirms this, according to which the pilot, the co-pilot, five passengers and a child lost their lives.

The plane crashed in Via 8 Ottobre 2001, so named to commemorate the Linate massacre when there was also a resident of San Donato among the 118 victims of the plane crash.