Poilievre premier in pectore: more seats for the CPC if Canadians voted today 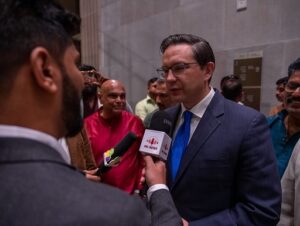 TORONTO – If the federal elections were held today, the Conservative Party would get more seats than the Liberals: and Pierre Poilievre would become the new prime minister of Canada.

As long as a federal election is likely soon – the Liberals and the NDP have a government agreement until 2025 – seat projections show that if Canadians voted today the Conservatives would get 108 seats compared to the 106 seats for the Liberals. Much of this has to do with the Conservative Party’s expected performance in the Greater Toronto Area, where the Liberals have previously dominated.

According to the same projections, the NDP would get 41 seats, the Bloc Quebecois 24 and the Greens 2. The remaining 57 seats, however, would remain at stake. Some of the suburban boroughs around Toronto, such as Oakville and Burlington, have always been strongholds for Liberals in the last election, but Nanos projections now suggest that these colleges would lean more towards the Conservatives. “The big turning point is that the Conservatives are doing better in Ontario than in the past and, as a result, are outpacing the Liberals in more districts,” Nanos pointed out. “There are some ridings that were Liberal and are now at risk: it will be necessary to follow very carefully what will happen in the next two years”.

The projections shows that also NDP would get more seats. In the last three elections, the NDP was “banned” from Toronto, but now some of the downtown colleges are expected to turn “orange.”

Nanos believes the Liberals are in desperate need of renewal if they are to win the election amid growing concerns about the impact of the potential recession: “I think the Liberals need to somehow renew their mission and vision for the Country and that they must try to explain to people why they deserve another term. So they are to be expected to do a bit of a renewal” Nanos said, adding that “if they don’t, thinking that what they have done in recent years will suffice, I’m not sure it will work … “.

In the pic above, CPC leader Pierre Poilievre (photo from his Twitter profile @PierrePoilievre)