Pope Francis will be in Canada in July 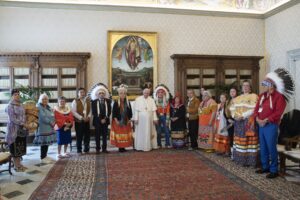 Edmonton, Quebec City and Iqaluit. These are the three stages of Pope Francis’ trip to Canada scheduled for the end of July. To tell CBC News are sources not authorized to speak publicly. Moreover, the Pope himself, in the final audience granted in the Vatican to Native American groups on April 1, had hinted that around the days of St. Anne, which is celebrated on July 26, he would arrive in Canada to visit native Americans in their territories and ask forgiveness for the actions of members of the Roman Catholic Church in residential schools.

The delegation that traveled to Rome – 32 indigenous elders, custodians of knowledge, survivors of residential schools and young people from all over Canada, representatives of the Métis, Inuit and First Nations peoples – said they expected Pope Francis to apologize for the Church’s role in running residential schools on Canadian soil as requested by the Truth and Reconciliation Commission. And while waiting for this to happen, Metis National Council President Cassidy Caron said his organization also discussed the planned papal visit through a committee created by the Canadian Bishops’ Conference. “We hope that the Pope will come to Canada – said Caron – he will apologize, he will offer, hopefully, somehow stronger apologies … that go a little further and will recognize the role of the Catholic Church in residential schools. Not just those people.” Caron hopes that if the Pope goes to Edmonton he will take the opportunity to visit Lac Ste. Marie. Anne Pilgrimage, designated Canada’s National Historic Site, 78 kilometers northwest. “It is a special place – he said – a spiritual place, a place of healing for Métis people”.

The Pope’s planned one-day trip to Iqaluit follows an invitation from Inuit Tapiriit Kanatami (ITK) President Natan Obed, who has been asked by Inuit leaders to support a papal visit to the capital of Nunavut. “Considering that the Catholic Church has had an imprint in the Canadian Arctic for over 100 years, we felt it was very important for the Pope to see our land and understand the Inuit context in the broader indigenous context, the presence of the Catholic Church and the role it has played in the management of residential schools.”

Obed said ITK was part of an on-site visit by Vatican officials last Friday to Iqaluit, a visit he described as positive.

The Canadian Bishops’ Conference (CCCB) said it is consulting with national indigenous organizations on dates and places, which are not yet final, and will continue talks to plan the visit if and when it is confirmed.

It should be remembered that Pope Francis has received numerous invitations from indigenous leaders to visit their territories, including the leaders of the First Nations in Manitoba and Kúkpi7 (Chief) Rosanne Casimir of Tk’emlúps te Secwépemc. But because the 85-year-old pontiff has health problems (due to limping sciatica and has difficulty taking stairs) the central hubs that can accommodate as many residential school survivors as possible will be selected to represent northern, western and eastern Canada. “The Canadian bishops are grateful that Pope Francis has accepted their invitation to visit Canada on a pilgrimage of healing and reconciliation,” the CCCB wrote in a statement to CBC News , “given the Holy Father’s advanced age and desire for simple and modest visits, we can expect that, given Canada’s size, the Canadian visit reflects this reality both in the duration of the pilgrimage and in the geography”.