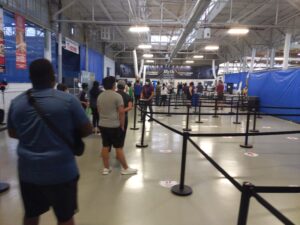 TORONTO – Vaccination passport yes, vaccination passport no. The controversy, stimulated also since it is happening overseas on the vaccination obligation, has suddenly broken out even here in Canada, with the various levels of government that are not able to express a common position on a burning issue, destined to accompany us throughout the summer. But let us put our own house in order.

The request for a single document, official and authorized by the authorities would have at this time a double value: the first is that relating to travel, the second has more to do with the gradual return to normality after passing the peak of the third wave of the Covid-19 pandemic. In Europe, since the first of July, the Green Pass has been in force, an electronic and paper document in which the vaccination path of people is recorded. This allows you to travel freely in the various States of the European Union – net of potential individual restrictions decided by the Member States – and to access certain services.

Here in Canada it should be the federal government that issues a similar document, supplementing the evidence of the first and second vaccinations we received when we were given the doses of vaccine. Another issue is the need to have a document certifying vaccination with a view to the gradual reopening of our economy, which will undergo a step forward this Friday, with the transition to phase 3 of the provincial roadmap. On Tuesday, some representatives of Ontario’s production categories had made an express request to the province to approve and issue a vaccination pass. today it was the turn of the mayor of Toronto John Tory, who summarizing the thought of many other local administrators asked the Ford government to
activate the vaccination passport.

“The bottom line is that if there are people including government who are going to ask you to show that you’ve been vaccinated or not as just a practical means, then the same government, the provincial government in this case, has to provide something to people to be able to show they’ve been vaccinated,” Tory said on Wednesday.
“Who else is going to provide the proof of vaccination? The province has all of the records in their system of exactly who got vaccinated, where and when and how many times”.

But on this point the provincial government does not want to hear us. Ontario Solicitor General Sylvia Jones confirmed that at this time the government has no plans to create the vaccination passport. “People have in their hands the piece of paper that confirms the vaccination and will not receive anything else”. This document can be easily falsified.