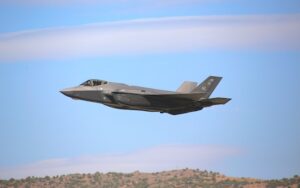 OTTAWA – After decades of postponements, delays and second thoughts, Canada has finalized the agreement to replace its aging fleet of CF-18 fighters with 88 Lockheed Martin F-35s that will begin arriving in the next few years: the purchase of aircraft will cost 19 billion dollars, but the bulk of the expenditure will be maintenance which should amount to around 70 billion.

The announcement of the purchase was made today by Federal Defense Minister Anita Anand. “The fleet of advanced F-35 fighter jets will ensure our Airmen have the long-term capability to defend the world’s second-largest airspace” Anand said. “It will help us meet our commitments to NORAD and NATO and will also bring tangible economic benefits to our country”.

The first aircraft are expected to be delivered in 2026 and the entire fleet is expected to reach operational capability between 2032 and 2034.

Satisfied Lockheed Martin Canada CEO Lorraine Ben: “Our company is honored to be selected for the project. The F-35 program offers tremendous economic benefits to the Canadian aerospace and defense industry and we look forward to now of continued growth” Ben said.

However, the agreement is in clear contradiction to the commitment made in 2015 by Prime Minister Justin Trudeau who, in the midst of the election campaign, announced that Canada would not buy the F-35s after controversial cost estimates had forced the previous government to freeze an old deal: a long and troubled story, given that Canada had been in talks to buy F-35s since the late 1990s.

A contradiction that Anand herself tried to remedy today, stating that “since 2015 the aircraft has matured and now we see that many of our allies, eight countries in particular, use the F-35”.

The F-35 fighter jet is the product of what is known as the Joint Strike Fighter program run by Lockheed Martin, an American aerospace company, in cooperation with the United States government, for the purpose of building and replacing fighter jets used by both the US military and those of allied countries operating closely with the United States. Through the program, allied countries and Canada itself have contributed hundreds of millions of dollars to the development of the F-35 fighter jet since the 1990s.

Lockheed Martin describes the F-35 as the “most advanced” jet on the market, providing “unprecedented situational awareness” with the ability to operate in five different types of domains: air, land, sea, space or the cybersphere. Some models of the jet can take off from aircraft carriers for use in naval operations. The jet is also equipped with electronic warfare technology that Lockheed Martin says is designed to “locate/track enemy forces, jam radars and disrupt attacks”. That electronic warfare technology, the technical details of which are publicly scarce, has been heralded as central to the company’s presentation that the F-35 is the most “survivable” fighter jet available as war moves increasingly into the cybersphere. Being able to do this while ensuring the jet’s electromagnetic and radar signatures aren’t obvious to enemies goes hand-in-hand with an emphasis on “stealth”. In summary, “stealth” refers to the jet’s ability to evade detection. The company says this gives pilots an advantage and increases their chances of survival when operating in contested areas.

“This project will ensure our airmen have the tools they need to defend Canada,” Minister Anand tweeted today.

Pic by Simon Hurry from Unsplash