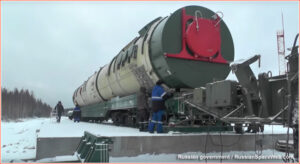 Russian President Vladimir Putin has congratulated his country’s military on the successful launch of the Sarmat intercontinental ballistic missile (ICBM), noting that this unique weapon will force everyone who tries to make threats against Russia to think twice.

“I congratulate you on the successful launch of the Sarmat intercontinental ballistic missile. It is a great and landmark event in the development of advanced weapon systems in the Russian army”, Putin said.

Russia’s Defense Ministry reported that the first launch of a Sarmat intercontinental ballistic missile (ICBM) was conducted from the Plesetsk cosmodrome in the Arkhangelsk Region on Wednesday at 15:12 Moscow time.

Russian news agency TASS reported that “the launch’s tasks were achieved in full. The designated characteristics were confirmed at all the stages of its flight. The practice warheads arrived at the designated area at the Kura proving ground on the Kamchatka Peninsula”.