Quebec, almost 5,000 irregular immigrants in one month. The story of Fritznel Richard 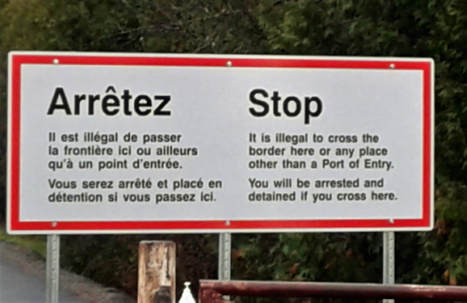 “We must continue to work with our American partners to improve the situation” Prime Minister Justin Trudeau said last week, saying he wanted to strike a new deal “that will allow us to reduce these irregular crossings and promote the legal immigration”. But the problem is long-standing and, according to many, it was exacerbated precisely when, in 2017, Trudeau himself – after Trump had declared that, as US president, he would put an end to the program that allowed Haitian citizens to remain in the United States beyond normal terms – invited migrants to choose Canada. “To those fleeing persecution, terror and war, Canadians will welcome you, regardless of your faith. Diversity is our strength #WelcomeToCanada” he tweeted on January 28, 2017 (in the screenshot below).

In Quebec, Trudeau’s choices on this issue are not popular. The costs incurred by the federal government to accommodate asylum seekers in hotels are not appreciated (94 million dollars since the September 2021 elections for rooms which, as the Globe and Mail denounced, often remain empty), so much so that a survey published it showed two weeks ago that 68% of the population want the border crossing closed, which Conservative leader Pierre Poilievre said he would do, but Trudeau did not. “I understand why desperate people are trying to cross there”, Poilievre said earlier this month. “Our immigration system is slow and malfunctioning”.

And, in relation to this, there is also another problem: often those who cross the border even as asylum seekers then find themselves in desperate situations precisely because of the delays in obtaining the documents necessary to work and, therefore, live or still survive, given the housing prices. In this sense, the story of Fritznel Richard is exemplary, the 44-year-old Haitian who died of hypothermia on 4 January near Roxham Road, while trying to return to the United States to be reunited with his wife and 18-month-old son in Florida, who had both left Quebec a few months earlier (another 11-year-old son is in Haiti). In an interview with the CBC, Richard’s wife explained that she and her husband had struggled to make ends meet in the Montreal area, amidst a struggle due to delays in obtaining a work permit and being unable to find a accommodation at a “human” price. Hence the decision to leave Canada.

Frantz André, spokesperson for a Montreal-based group that helps undocumented people, says the Canadian and Quebec governments need to do a better job of making asylum seekers feel welcome, issuing work permits and helping people find affordable housing. “They arrived here, in a country that claims to be welcoming and where democracy reigns, to die here, in 2023. Is this our welcoming land?” André said during Richard’s funeral in Montreal on Sunday afternoon. Richard’s wife, unable to return to Canada after abandoning her asylum request, had to attend her husband’s funeral via Zoom, on an internet connection, through the cold monitor of a computer. Tears streamed down her face. “#WelcomeToCanada”, Trudeau tweeted in 2017.

In the pic above, a sign at the Canada-US border (from http://www.bridgesnotborders.ca)