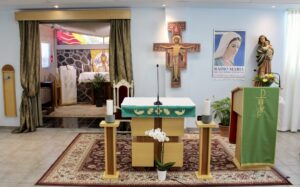 Radio Maria Canada (RMC) will host their inaugural open house on Wednesday October 13 between 10:00 am-5:00 pm and invites the community to come and visit. RMC’s new home is located at 4 Director Court (#105) in Woodbridge, after 25 years of broadcasting from their Toronto office at 1247 Lawrence Ave. West.

RMC is a Catholic radio station which operates 24 hours a day, 7 days a week and has been serving the Italian-Canadian community for many years. It offers programming in Italian, English, and Spanish. RMC, founded by the late Professor Luigi Pautasso, aired its first broadcast in Toronto in 1995. It is a member of the World Family of Radio Maria (WFRM).

The inception of the Catholic radio broadcasting service started in Erba, near Como in northern Italy in 1987. It was then that the broadcast station became a separate entity known as Radio Maria.

As the organization continued to expand, the WFRM was founded in 1998. It branches out to 92 radio stations around the world including countries in Europe, Africa, the Americas, Asia and Oceania. It reaches a population of approximately 500 million listeners around the world in more than 65 languages. Each station is headed by an autonomous association which are members of the WFRM.

RMC chose to hold the open house on October 13, the day when the Blessed Virgin Mary appeared for the last time to the little shepherds of Fatima in 1917. The day became known as the “Miracle of the Sun” and reportedly witnessed by over 70,000 people in Portugal.

RMC operates as a non-profit organization and is a registered charity governed by a Board of Directors composed of religious and lay people. Its operation is made possible by donations and dedicated volunteers which include program hosts, technicians and support staff.

RMC has over 20,000 listeners and thousands more supporters on various social media platforms. RMC aims to bring the Gospel message of joy and hope to people of all ages through various programs which include prayer, catechesis, music and human-interest stories. Throughout the pandemic, this has become particularly important for those feeling sick, lonely and isolated.

This is why RMC invites the community to come and tour the new location, see how the facility operates and meet the staff and volunteers during the day. Later, at 6pm, His Excellence Ivan Camilleri, auxiliary Bishop for the West Region of the Archdiocese of Toronto will cut the ribbon and bless the new location.

Then, at 7:00pm, His Excellence will preside the Inauguration Mass at St. Andrew’s Parish located at 2547 Kipling Ave. Event organizers invite the community to come and share in the day’s events, followed by light refreshments in the Hall following the mass.