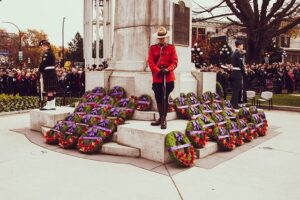 In-person Remembrance Day services return to communities across Canada. Last year, pandemic restrictions prompted smaller, scaled down ceremonies while others were cancelled to minimize the risk of infection.

This year, things are decidedly different. The easing of restrictions and greater capacity limits mean traditional Remembrance Day ceremonies return to some semblance of normalcy, albeit with Covid-19 safety protocols in effect.

While virtual livestreamed ceremonies are accessible for those who cannot attend in-person, the public is, once again, welcome to physically attend events at various locations all over the GTA. In Toronto, outdoor services begin at 10:45am at the Old City Hall Cenotaph located at 60 Queen St. W. Other locations include the Scarborough War Memorial, York Civic Centre Cenotaph and Fort York National Historic Site.

Remembrance Day, observed every year on November 11, is a day for Canadians to honour and remember the men and women who served and continue to serve their country in times of war, conflict and peace. It is an occasion for people to participate in ceremonies or observe a moment of silence as a sign respect for those who sacrificed their lives in the service of their country and to acknowledge those who continue to defend the peace.

In the lead up to this solemn day, symbolic poppies bloom on the collars of millions of Canadians as a sign of respect to honour fallen veterans. This year marks the poppy’s 100th anniversary in Canada.

The custom of the Remembrance Poppy originated through the efforts of Madame Anna Guérin of France. She was inspired by the late Lieutenant Colonel John McCrae’s poem, “In Flanders Fields”. Originally, the sale of cloth made poppies benefitted widows and orphans of war-torn France. Later, her idea expanded to all World War I Allied countries as a fundraising campaign to support fallen veterans and their families.

On July 6, 1921, the precursor to the Royal Canadian Legion, The Great War Veterans Association, adopted the concept as a symbol of remembrance. Funds raised locally through the Legion’s Poppy Campaign stay within the community and are directed to help support veterans, their families and dependants. Whether they are made from fabric, yarn, paper or plastic, the poppies have remained a century old symbolic visual pledge to honour the service, courage and sacrifice of service members.

Events and wreath laying ceremonies will take place at various Royal Canadian Legions across multiple cities including Etobicoke, Mississauga and Brampton. Aside from Ottawa, Brampton is one of the few communities that conducts a March Past, Roll Past and Fly Past in the same Parade as a salute to veterans.

In honour of the 100th year anniversary, a temporary poppy adorns the iconic Toronto sign in front of City Hall.