Richmond Hill candidates vie for the support of residents 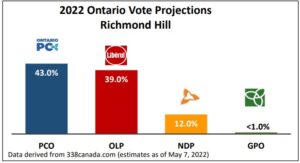 The political landscape in Richmond Hill is gearing up for a showdown between the PCs and the Liberals. The constituency is situated in the 905-region, about 40 km north of Toronto. It is considered by some to be part of the Ford Nation core base.

Nestled between Markham in the east and Vaughan to the west, the district was created in 2003 from parts of the Oak Ridges riding. It encompasses the neighbourhoods of Elgin Mills, Langstaff, Bayview Hill, including the southern part of the Town of Richmond Hill and the eastern portion of Markham. 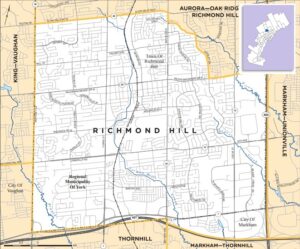 With a population of 110,175 residents, the riding is home to several culturally diverse groups, primarily those of Chinese or Iranian communities. Another significant segment of the local population are those who self-identify as Italian (8,315 residents). They are one of the largest ethnic groups who originate from Europe and represent 8% of the district’s population. 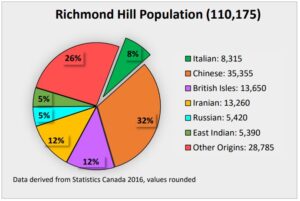 Daisy Wai, current MPP, seeks her second term in office and to hold the seat for the PC. She was elected in 2018 with 51% support of the electorate. The Liberals took 28% of the vote, but the PC’s margin of victory was 10,116 votes.
At the time, it was a big win for the PC as they took the riding over from the Liberals, who had dominated the political landscape in the district between 2007 and 2018.

Wai, who has lived in the riding since 1998, told the Corriere, “It is the best place in the GTA to live and raise a family”. She echoed her Party’s plan to “build new homes, roads and highways”, and “create new and better jobs” for the people of Ontario.

Wai’s closest contender is Liberal candidate Roozbeh Farhadi. He aims to build up support for the Party. “Affordability and economic dignity are key this election”, he said. He pointed to his Party’s plan to reduce transit fares, eliminate corporate taxes on small businesses who have suffered in the wake of Covid-19 and to raise the minimum wage of healthcare workers to $25/hr. 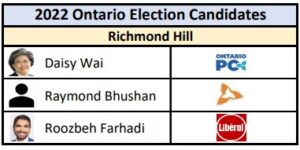 NDP candidate Raymond Bhushan is also running in this election. He expressed “a deep appreciation for the rich culture and diversity of the city”. He too highlighted segments of his Party’s platform to “expand health care with improved access to dental care and mental health services”, stating, “that is what Ontarians need.”

It would appear both the Liberals and NDP will have some ground to cover if they want to reverse the results of 2018. According to the most recent projections by 338Canada.com (May 7), the PC maintain the lead at 43%. The prediction model uses algorithms and considers all major polls. It shows the Liberals at 39% followed by the NDP at 12%. (See graph at the top of the article)