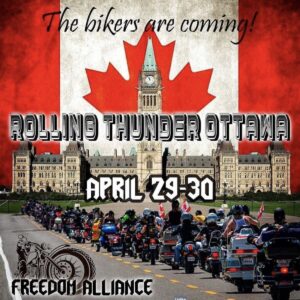 OTTAWA – There will never be another protest like that of the Freedom Convoy. Ottawa will not be put in check again by the protesters. Ottawa police are preparing for the arrival of the Rolling Thunder, a convoy of motorcyclists that could invade downtown Ottawa between Friday and Saturday.

The demonstration was organized to protest the erection, during the occupation of the “Freedom Convoy” in January and February, of a fence around the National War Memorial – defined by the organizer as a desecration of the monument. The fence was erected after a protester was seen jumping on the Tomb of the Unknown Soldier and, subsequently, urinating in the snow on the monument itself.

According to Sheard, the woman was immediately removed from the place and the real culprits of what happened would be the dogs.

Meanwhile, should the situation get out of hand, up to 831 officers of the Royal Canadian Mounted Police (RCMP) will be ready to intervene.
During a special meeting, the Ottawa Police Services Board approved a request to alert, as they say, the Red Jackets.

The appointment of RCMP agents does not mean that they will be used during the protest, but it does offer some “flexibility” to the Ottawa policemen in case the situation should take a turn for the worse. “This is a new and better way to try to manage these events,” said interim chief Steve Bell.

Meanwhile, the Ottawa police have decided to ban the presence of motorcycles in the city center and to increase the number of patrol officers during the weekend. “It will be a peaceful demonstration, we talked to the city, we talked to the police and we explained the route, everything is resolved – guaranteed the organizer of the rally Neil Sheard – we will not go around the National War Memorial”.

The bikers had actually planned to pass in front of the National War Memorial as part of the ceremony: now it will be necessary to see if changes have been made to the already established itinerary.

Meanwhile, the tones of controversy rise for the announced presence at the protest, as a speaker, of Chris Sky, whose real name is Chris Saccoccia.

In recent months Chris Sky has appeared at rallies across Canada to protest Covid-19 public health measures and has been arrested several times. The charges he will have to answer for also include death threats and the assault of a policeman.

Meanwhile, “Rolling Thunder” organizer Neil Sheard has distanced himself from Sky: in a video posted on Wednesday he stated that ‘the Sky special guest’ – as reported on the “Rolling Thunder” website – has nothing to do with the event he planned.