“Santo subito”: the homage of the faithful to Pope Ratzinger 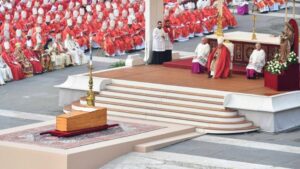 VATICAN CITY – They lined up from 5.30am, in the surreal atmosphere of St. Peter’s Square shrouded in thick fog and armored by the police, to attend the funeral of the Pope Emeritus. At 9.30am, the (Italian) time when Ratzinger’s funeral began, over 50,000 faithful were present to bid farewell to Joseph Ratzinger, together with delegations from various countries.

This is how the Vatican, Rome and the world paid their last respects to Benedict XVI this morning, with the crowd loudly and repeatedly chanting “Santo Subito” (“Make him a saint now”). People of all ages and nationalities, many young people, lay people and priests, families, nuns, groups from Italy and Germany with flags, banners and placards with inscriptions like “Danke Papst Benedikt!” and, indeed, “Santo Subito”. 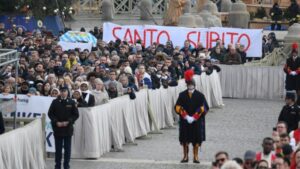 Pope Francis, who arrived in a wheelchair, presided over Mass and, in his homily, greeted his predecessor thus: “Benedict, faithful friend of the Bridegroom, may your joy be complete as you hear his voice, now and forever!”.

The ceremony was attended by heads of state, crowned heads and leaders of other faiths. Many institutional representatives who wanted to be present. In the front row, the President of the Italian Republic, Sergio Mattarella, seated next to the Prime Minister, Giorgia Meloni. In the Italian delegation, among others, there were the president of the Chamber, Lorenzo Fontana, the ministers Gennaro Sangiuliano, Carlo Nordio, Anna Maria Bernini and Giancarlo Giorgetti and the former Prime Minister, Mario Draghi. On the German front, President Frank-Walter Steinmeier. With him, the chancellor Olaf Scholz. 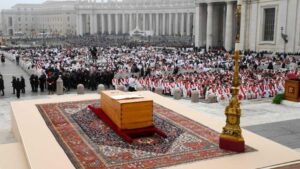 Brought to the churchyard for the ceremony, with the bells ringing for the dead, Pope Ratzinger’s coffin was greeted by a long applause from the faithful and by a moved Monsignor Georg Gaenswein, who kissed the coffin before placing the Gospel on it. Precisely he, a faithful secretary close to Benedict XVI right to the end, in the days preceding the funeral did not spare harsh criticisms of “the other” Pope, the one in charge: “Francis’ grip on the Latin Mass broke Ratzinger’s heart” . And then: “Francesco has made me a prefect in half”, referring to the fact that Bergoglio in 2020 had dismissed him from the role of prefect of the Papal Household, while leaving him in office. All statements that are already ‘black and white’ in a book, “Nothing but the truth. My life alongside Benedict XVI”, to be released in a few days. But there was, of course, no room for controversy at the funeral.

After the rosary, in Latin, Mass was presided over by Pope Francis and celebrated by the Dean of the College of Cardinals, Giovanni Battista Re, in front of around 130 cardinals and, we said, the 50,000 faithful who add up to the almost 200,000 people who paid homage to Ratzinger’s body during the three days it was inside the Basilica. 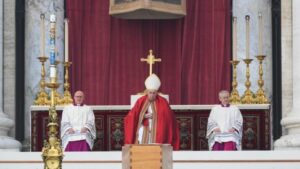 At the end of the mass, Bergoglio “greeted” the coffin of his predecessor, before it was taken to the Vatican Grottoes to be buried in what was once Papa Wojtyla’s crypt.

Before the ceremony, Ratzinger’s “Rogito” had been released. In the document, which is written in Latin and which describes not only the Pontificate but his entire life, we read – among other things – that Benedict XVI “firmly fought against the crimes committed by representatives of the clergy against minors or vulnerable people, continually calling the Church to conversion, prayer, penance and purification”. And then: “As a theologian of recognized authority, he left a rich heritage of studies and research on the fundamental truths of the faith”. The “Rogito” was inserted in a metal cylinder and placed in the coffin, as a perpetual reminder of a Pope who chose, astounding the world, to renounce the role of successor to St. Peter.

On the website www.corriere.com it is possible to watch the entire funeral ceremony