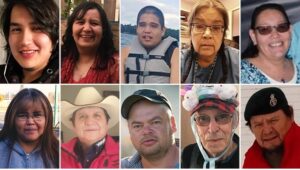 TORONTO – Amid grief and controversy, the manhunt continues in Saskatchewan. The question, after the massacre of 10 people and the wounding of 19 others with stab wounds, is only one: where is Myles Sanderson hiding? According to the chief of the Queen Police Evan Bray would no longer be in the city. “We have received information that leads us to believe that Myles Sanderson may no longer be in this community,” Bray said. And although we don’t know where he is, we are still looking not only inside Regina, but also throughout the province,” he said. It dates back to last Sunday the sighting in the city of the Nissan Rogue of which the fugitive could be driving. Since then nothing more. “He could be injured – said the police – certainly he is armed and dangerous”.

The James Smith Cree Nation, where 9 of the ten victims were killed, is in shock: in addition to mourning the lives lost, it is terrified at the thought that Myles Sanderson – the brother Damien with whom he carried out the massacre was found dead in a grassy area of the First Nation – could still wander around the reserve.

Meanwhile, the RCMP has made known the identities of the victims – some targeted, others randomly hit – massacred by the slashes launched by the two Sanderson brothers.

Today the Saskatchewan Health Authority (SHA) said that of the 17 people hospitalized with stabbing-related injuries, 10 remain in hospital. “Three patients are in critical condition, seven are in stable condition while seven other people have been discharged,” the SHA statement said.

A massacre, in full rule, this one that took place in the reserve of natives. A massacre, according to many, that given the criminal record of Myles Sanderson could perhaps also be avoided. The ifs are many but despite his long criminal history, which includes 59 criminal convictions since he was 18, the Parole Board earlier this year released Myles. His most recent convictions are for gun attacks, robberies, threats, association with gang members, drug dealers, prostitution rings. There is no shortage of kicks in the face of a policeman, forks used as knives, violent treads on the head of two people and the list of unprecedented violence could go on.

The controversy, the anger, the unanswered questions of the community wounded by Sanderson’s murderous rampage grows day by day. “Canada’s Parole Board will examine the decision made earlier this year to release Myles Sanderson, now wanted,” said Public Safety Minister Marco Mendicino. Several months before the murders, the Parole Board of Canada said in a Feb. 1 decision that Myles “would not pose a great risk” and his release would “contribute to the protection of society” by facilitating his reintegration. “We need to focus on families right now who are suffering a lot, as you can imagine. The trauma is huge and I am also certain that the RCMP is doing everything possible to mobilize resources for them,” the minister said. Supporting the affected families is a must, of course, but to avoid that a person who has collected 59 sentences in about 13 years, can continue to sow violence – and in this case even death – would have been even more imperative.

There are responsibilities to be ascertained. Meanwhile, Sanderson remains a bird of the woods. Untraceable.