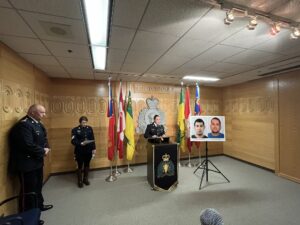 TORONTO – A full-blown carnage. Ten people were killed and 18 were injured following a series of stabbings on Sunday in Saskatchewan at the James Smith Cree Nation and Weldon.

The attack was launched in 13 different areas. The RCMP manhunt is ongoing: the two fleeing suspects are Damien Sanderson, 31, and Myles Sanderson, 30. According to Regina Police Chief Evan Bray, some victims appear to have been targeted while others were shot at random.

But the motive remains a mystery.

The identities of the victims have not been officially disclosed, but Weldon residents have identified one of them as 77-year-old Wes Petterson.

The alert was also extended to the neighboring provinces of Alberta and Manitoba, as the alleged killers were seen fleeing in a car, possibly a black Nissan Rogue with 119 MPI license plates, although police said it was possible that they had changed vehicles.

Police have asked residents of the area to use extreme caution. Checkpoints have been set up throughout the province and the population has been urged to stay safe. “Despite the relentless efforts of last night by both the RCMP and Regina’s police,” Bray tweeted yesterday, “the suspects are still at large. More investigators are coming to take charge of this investigation and we will not stop until these two individuals are located and taken into custody.”

The two suspects – it is not clear if they are relatives – were spotted by some witnesses in Regina which is about 300 kilometers from the sites of the massacre.

Saskatchewan Prime Minister Scott Moe tweeted his condolences Sunday to the family and friends of the victims and said the flags of provincial government buildings will be lowered to half-mast one day for every person killed.

Prime Minister Justin Trudeau tweeted sunday afternoon that he was “shocked and devastated by the horrific attacks.” “As this is an evolving situation, I encourage everyone in the area to listen to law enforcement advice and follow due precautions. Those responsible for today’s repugnant attacks must be brought to justice.”

Of the suspects, so far, no trace. The hunt continues.