School, a return full of anxiety and unfulfilled promises 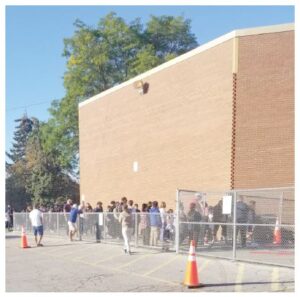 TORONTO – Back to school amid gatherings, worries and unfulfilled promises. As many parents feared, the first day of school – today for Toronto students – was not one of those days to remember with pleasure. In front of the institutes, gatherings. It was largely predictable, as the boys hadn’t seen each other for months. But evidently the “plan” elaborated by the provincial government and by the various administrations (both the public one, the TDSB, and the Catholic one, the TCDSB) had not thought about it. Thus, it fell to the teachers and principals to try, desperately (and blatantly without a “guide from above”), to impose distancing at least at the entrance.

“Let’s hope so …” was the almost unanimous comment of the parents who also had to suffer a bitter disappointment just on the eve of the reopening, on Wednesday, when both the TDSB and the TCDSB announced the suspension of all extra-curricular activities, “high contact” outings and sports for the entire month of September, “following a recommendation from Toronto Public Health.” A nice turnaround, after the return of extra-curricular activities, at least those outdoors, had been “heralded” in recent weeks.

A decision, that of suspending them, which also appears paradoxical in light of the fact that with the return to class many families have discovered that their children have found themselves in real overcrowded clases. In an email published today by Ctv News, a Toronto District School Board teacher – who asked to remain anonymous – warned parents that “there will be 38 students in the classroom” and that “the size will not change until a ‘reorganization’ in October “. And many parents have relied on social media to describe similar situations in their children’s classrooms accompanied by the hashtag “UnsafeSeptember2021”.

“A Grade 7 class has 40 students! 40! They will practically sit on top of each other”, Yona Nestel said on Twitter. “Ours has 29 students” wrote Hannah Sung. Some Ontario teachers made similar claims alongside images of their crowded classrooms a year ago when the province began experiencing the second wave of the Covid-19 pandemic.

Last month, the province released its long-awaited back-to-school plan, although details on the actual number of children per class were vague. According to the education law, the class size limit for preschool and kindergarten is 29 and upper grades must have a maximum of 23 pupils. Same limit for secondary school classes. But in a statement also to Ctv News, TDSB spokeswoman Marcy McMillan said the larger grades at the start of the school year are no surprise.

In all this chaos, the Minister of Education, Stephen Lecce, continues to reassure families, saying that schools will not close this year and that teaching will be in presence. But Dr. Kieran Moore, Ontario’s Chief Medical Officer, has already got his hands on, announcing that if infections occur in schools, sweep tests will be carried out within the institutions themselves and only at a later time, in case of important outbreaks, “we will opt for closure”.

Meanwhile, extra-curricular activities have already been suspended before starting. And “chicken-coop classrooms” don’t seem like a great idea in the middle of a pandemic. If a good day starts in the morning…

In the photo above, the entrance to a school in Toronto, this morning