School in Ontario:
Impasse negotiations,
pressing of the CUPE 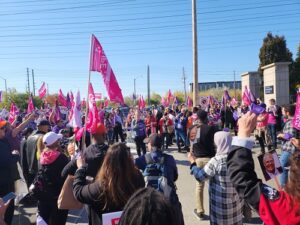 TORONTO – “We know that they are there to talk about what their next political decisions will be, we also know that in the end a strike can be avoided by coming to the negotiating table with a real proposal that respects workers and that respects families.” This was stated by the president of the Ontario School Board Council of Unions (OSBCU) Laura Walton, present at the protest that was held Saturday in front of the Toronto Congress Centre where a general meeting of the Progressive Conservative of Ontario was underway.

Within days of contract negotiations breaking down, nearly 200 education workers wanted to breathe down the neck of the Ford government. The province and the union that represents about 55,000 education workers to try to find an agreement – which is currently a mirage – are expected to return to the negotiating table on November 1. A failure of the talks could result in a lockout starting November 3.

Avoiding an abstention from work is what the government says it wants to do but at the moment an agreement seems unattainable. Not even the presence of the mediator who attended the talks last week was able to break the deadlock for months. “The two sides are too far apart, the talks should be adjourned,” was his laconic advice.

What has been clear from the beginning of the negotiations is the firm will of both sides not to give in. “CUPE by refusing to compromise on unreasonable demands is trying to disrupt classroom classes,” Education Minister Stephen Lecce thundered.

The main problem – certainly the most difficult to solve – is that of the increase in payroll. The CUPE calls for annual wage increases of 11.7% while the government in response has offered increases of 2% per year for workers earning less than $40,000 and 1.25% for everyone else. But this is only one of the stumbling blocks preventing contract renewal: education workers are also demanding that overtime be paid twice as much as normal pay, 30 minutes of paid preparation per day for educational and ECE assistants, an increase in benefits for all workers.

The days go by and the specter of a strike takes shape more and more with all the inconvenience it would cause, among other things, to parents. On November 3, the school workers belonging to CUPE are in a position of legal strike: “What happens will depend on the outcome of the negotiations”, reiterated Walton.