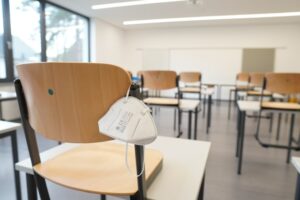 TORONTO  – Here we go again. The Ontario government’s ostentatious security about the reopening of schools after the Christmas holidays has melted like snow in the sun. After a timid two-day postponement announced last week, the bad news arrived on Monday: schools will remain closed at least until January 17. Ford suddenly reversed course and ordered schools to switch to virtual learning.

A sudden reversal caused by the avalanche of Covid-19 cases of the Omicron strain that has caused a good deal of frustration to families, teachers and children and that has intensified the requests to the province to do more to ensure a safe reopening. “We hoped to be able to keep schools open for children. It’s clear that it’s not safe to do it, and it’s not even wise to do it right now,” said Cathy Abraham, president of the Ontario Public School Boards’ Association, “but we have two weeks to do something. We hope that the government will use the two weeks and not save a penny as Prime Minister Doug Ford has promised and introduce N95 masks in schools, include teachers in those entitled to now limited PCR tests and add the Covid vaccine to the list of mandatory vaccinations for students”.

But the Ford government’s decision, which among other things disavowed the province’s Chief Medical Officer of Health who announced the reopening of schools today, prompted a large group of parents — the Ontario Families Coalition that fought to keep schools open — to create a Go Fund Me page to raise funds for lawsuits. In short, the latter was the straw that broke the camel’s back.

Hamilton’s mother, Jennifer Abbatiello, has made it clear that distance learning doesn’t work for her children — a nine-year-old autistic and a seven-year-old — so she intends to withdraw her children from virtual learning. “Remote study has an impact on their mental health – said Abbatiello – schools should be considered of primary importance”.

Abbatiello quit his job during the initial lockdown to help his children with study. He recently started working from home again, but “will have to stop because of these closures and no family member who can help, especially not at such short notice.”

In a letter to parents the Toronto District School Board (TDSB) said its priority remains ensuring the mental health and well-being of students and providing a meaningful learning experience. In the coming days, teachers will contact students to make sure everyone is on the online learning platform, such as Brightspace or Google Classroom. TDSB elementary school students have until January 7 to move from face-to-face to virtual learning, while high school students can do so between now and January 7.

The Elementary Teachers’ Federation of Ontario (ETFO), which is in favor of a postponed resumption of face-to-face classes so additional protective measures can be put in place, called the province’s announcement “a safe decision” compared to Moore’s last week. “But more needs to be done,” says the union, which represents Ontario’s 83,000 teachers and elementary school substitutes. “The extension is fine, but I have serious doubts that on January 17 we will be able to resume face-to-face learning – said ETFO President Karen Brown – classroom learning is the best and is the preferable way for students to learn, but it must be safe”.

Similarly, the Ontario English Catholic Teachers’ Association (OECTA), which represents 45,000 elementary and high school teachers, says more needs to be done. Both unions are calling on the province to ensure that all teaching staff wear N95 masks, that all those who work in the school are vaccinated, that access to the booster vaccine for teachers is prioritized, that HEPA filters are installed in all classrooms and shared spaces. And also the government is asked to continue to monitor Covid-19 cases in schools.