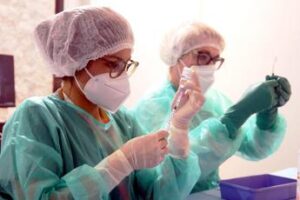 TORONTO – Elementary schools in Quebec City and other areas of the French-speaking province reopened today.

British Columbia and Alberta, the provincial governments, despite pressure from outside, decided to retain classroom teaching throughout the third wave of the Covid-19 pandemic. In Italy, just today, with the new changes in the country’s color map, 90m percent of students left remote teaching and returned to school. In France, where primary schools remained open even during president Emmanuele Macron’s tough lockdown, high schools started again with classroom teaching. Different countries, different jurisdictions, all grappling with the same dramatic problem: how to ensure the safety of students during the pandemic and how, at the same time, to protect the educational aspect that, of course, is not fully guaranteed with distance learning. In Ontario, the provincial government chose instead to take another route during this third wave. Schools closed on a provincial scale, without any distinction of the epidemiological picture that is different between the various areas of Ontario, online teaching for all students. Officially, as the Minister of Education Stephen Lecce has said on more than one occasion, this is a temporary measure, which could change if the contagion curve were finally to slow down and start a significant decline.

For now, all we know is that the latest crackdown on the doug ford-led government, the one that imposes an obligation to stay home and not go out for reasons deemed essential, will remain in place until May 20. At the same time, it is logical to expect that schools will also remain closed until that date. Then, officially, there will be just over a month to go until the end of the school year: it will be easier for everyone – starting with the Minister of Education to get to the individual provveditorati – to extend distance learning until the end of June.

In short, it will be discussed again in September, which translated into pennies means two years of teaching almost completely lost by ontario students. The responsibility, of course, is shared between Lecce itself and the various school boards, unable after a year and a half of pandemic to activate safety protocols, guidelines, and effective measures to combat contagion in schools. Not that this was the priority, it seems: just see what happened on the Toronto Catholic District School Board or the Catholic department in Halton, where almost all the meetings were used to discuss more, LGBTQ2+ community rights, and Pride flags. Which, incidentally, are important issues, but perhaps in the midst of a pandemic they become marginal and not priority.