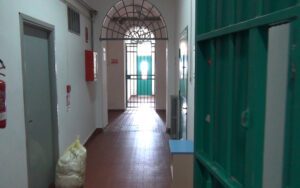 PONTREMOLI (Massa Carrara) – She gave birth in prison, at the age of 17, helped by police officers who became obstetricians. And everything went well: the girl is fine, the newborn – a girl weighing no less than 3 kilos and 200 grams – as well. A beautiful story, with a happy ending, within the walls of the Women’s Penal Institute of Pontremoli, a village in the province of Massa Carrara, in Italy, which mainly young female prisoners of foreign origin.

It is the night between Monday and Tuesday when the young guest of the prison, pregnant, about twenty-six weeks (according to what was reported by the girl who had just arrived on Sunday, but the pregnancy was probably more advanced), begins to have the typical pains of labor. After the first moments of difficulty – the girl is a foreigner, she does not speak the Italian language and, initially, one thinks of a stomach ache – the officers on duty intuit that it is something more important also because the girl begins to cry and scream in pain.

At that point, her waters broke and everything became clear: she was about to give birth, evidently well ahead of schedule. The agents call the emergency number 118 but there is no time to waste and, while waiting for the doctors to arrive, they help the girl to give birth, inviting her to breathe and push hard. The baby comes out, is wrapped in a blanket and is immediately in the arms of the young mother. A few moments later, the doctors arrive. The mother is fine and the child appears healthy and robust: 3,200 kg.

The girl, escorted by the agents, is taken to the Hospital of Massa, where the head of the Gynecology department congratulates the two agents who then took care of the young mother and the new born upon arrival at the hospital.

It is the first time that a birth has been recorded inside the Pontremoli prison. The prison is the only female one in Europe (all the other institutions also have a male section) and was born as an “experiment” aimed at promoting the reintegration of young guests into society by offering them opportunities of work in a “protected” environment like that of the Lunigiana village where in fact some of the girls, after having served their sentence, found a job. Some of them then decided to stay and live in the province of Massa Carrara. Who knows if the young mother will make the same choice, after the experience lived in Pontremoli.

The pic is taken from the web site of the Ipm, Istituto penale minorile di Pontremoli