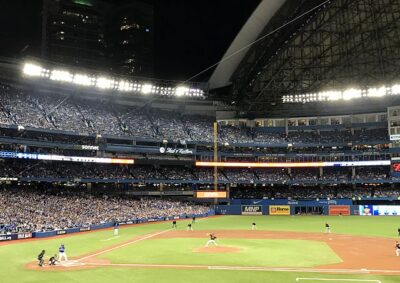 June 3, 2021 marks the 32nd anniversary of the opening of the world’s first stadium with a retractable roof. Its name comes from its function – a huge stadium with an opened roof – the SkyDome. Where did the idea for this stadium come from?

The roots of the idea to build a roofed stadium in Toronto go back to 1968, when the city lost to Montreal the opportunity to run for the Olympic Games in 1976. In its original outline, it was supposed to consist of 80,000-100,000 seats.

The impetus for the construction of the closed facility came after one of the most important games in history – the Gray Cup in November 1982, which was held at the Exhibition Stadium.

The game, featuring the hometown Toronto Argonauts, was played during a torrential storm that made most of the audience soaked, and the media dubbed it “Rain Bowl”. To make the bad situation even worse, the toilets overflowed.

The next day, at a rally in front of Toronto City Hall, tens of thousands of people began chanting, “Enough is enough!”, “Toronto is a world-class city”, “We want a dome, we want a dome!”.

The location was chosen in the vicinity of CN Tower, near Union Station, the main railway and transferring point. The selected area was a major Canadian National Railway switch point and included the CNR Spadina Roundhouse. The abandoned areas of downtown were part of the revitalization plan.

The idea for Sky Dome was that it was supposed to be a sports and entertainment venue for all kinds of events, i.e., sports, exhibitions, trade fairs, concerts, etc.

People said: “We need a world-class stadium”, “This stadium will need a roof to protect us from the rain”, “We need a stadium that will open when the sun is shining and close when it rains”. It took 6 years from planning started in 1983 to the stadium’s completion.

Before the grand opening ceremony of the stadium, it was said: “We need mass broadcast of all media all over Canada so that everyone can see the miracle of our engineering”. It all sounded good in theory.

The TV broadcast was supposed to run for 90 minutes, the event was to be one of the most spectacular shows, with fireworks display and the launch of 30,000 balloons at the end. Unfortunately for 45,000 spectators, the weather was not cooperating.

During the day there was heat and, in the evening, heavy rain and thunderstorms came.

The construction cost then reached $ 570 million (in 2021 it would be over $ 1 trillion) and was to ensure that no one would ever get wet again at an important ceremony. So much for the theory. Reality came behind her.

The stadium was officially opened on June 3, 1989 during the mega-event “The Opening of SkyDome”. The roof was ceremonially “opened” with a laser pen by Ontario Prime Minister David Peterson.

Supposedly due to a storm and lightning, the sunroof could not open fully during the Sky Dome opening ceremony. Despite the audible shouts of “shut the roof”, Chuck Magwood, president of Stadium Corporation of Ontario (Stadco), insisted that the roof remain fully open.

As an additional attraction, military paratroopers were to land through the open roof on the stage, where a huge Canadian flag was placed. Due to bad weather, people gathered in front of the stage had to make a human chain, to protect the paratroopers in the event of a drop.

Opening the SkyDome was remembered forever. We will remember SkyDome forever.