Soccer, Canada in the World Cup: the Ones to Watch 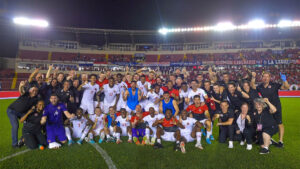 In a few months the World Cup will be taking place in Qatar, some of the worlds finest will be playing to be crowned champion of the world.

With 32 teams it can be difficult to keep track of them all, this new segment will look to focus on one team, per article. It will focus on past World Cups, International prestige and quality of team, among other factors to really build the enthusiasm for the coming competition.

What better place to start than with our boys in red, Team Canada is going to this world cup with high hopes. It is our second time going to the world cup, the last time being in the 1986 world cup in Mexico.

Canada had an early exit in the group stage after not scoring any goals, losses against the former USSR, France and Hungary meant Canada had a very disappointing world cup.

The team going into the competition this year is our Golden generation, the best Canada has had in a long time. We came first in our qualifying group, beating both Mexico and the United States for that coveted first place spot. The team we will be bringing will be young and full of talent with players like; Alphonso Davies from Bayern Munich, Jonathan David from LOSC Lille, and Stephen Estaquio from FC Porto, who all play for top tier european teams, Davies has won the League in Germany four times already, not to mention the UEFA champions League, proving Canadian players can compete at top levels.

Canada is a team with pace, energy and is full of life, although not the most experienced they will definitely be Ones to Watch.