Soccer World Cup 2026: matches in Toronto and Vancouver, Edmonton out 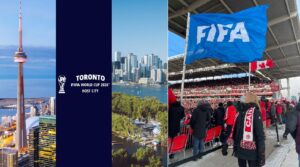 TORONTO – The city of Toronto has been chosen as one of the 16 sites for the 2026 World Cup to be held in Canada, USA and Mexico: Fifa announced it yesterday, at the end of a long selection among 22 candidate cities. Vancouver is the only other Canadian city chosen to host the games. Edmonton, included on the list of potential sites, didn’t make it.

After all, the slice of the “cake” reserved for Canada was small: only 10 of the 80 games scheduled. Ten (10) were also reserved for Mexico, while the United States took the lion’s share with 60 games that will be played in Seattle, San Francisco, Los Angeles, Kansas City, Dallas, Atlanta, Houston, Boston, Philadelphia, Miami, New York / New Jersey. Monterrey, Guadalajara and Mexico City are the cities chosen for Mexico.

Tory noted that hosting the tournament will provide the city with an opportunity to kickstart projects that will help grow football and sports facilities in general starting with BMO Field, the Toronto stadium that currently has a capacity of 30,000. That capacity will be increased to at least 45,000, the minimum number of seats required by FIFA. The works will start in 2024.

Hosting World Cup matches in Toronto will come with a cost to taxpayers about $ 290 million, with provincial and federal governments having to pay roughly two-thirds of the bill. As a host city, Toronto will spend approximately $ 41.2 million building training facilities for visiting teams. The initial (total) estimate of $ 30 to $ 45 million provided by the City in 2018, when Toronto first expressed interest in hosting the games.

The economic impact of the event, however, could be considerable. City staff have estimated that the tournament will have an impact on GDP of $ 307 million in Toronto, including the creation of 3,300 jobs. It is also expected to bring 174,000 overnight visitors to the city and generate 3,300 jobs.

It is not clear how these numbers were generated or whether they will in fact be fully realized. But the mayor was not about to dampen his enthusiasm.  “The World Cup will fill every hotel room, every restaurant will be full, all businesses will see people from all over the world come and buy things here,” the mayor said.

Big disappointment, however, for Amarjeet Sohi, mayor of Edmonton. “We advocated fiercely, we had our provincial and federal government partners on board to provide funding, and most of all, we had the support of Edmontonians – he wrote on Twitter – . I am proud of the bid that we put forward, and I will explore other ways to put Edmonton on the world stage. I wish the recently announced host cities the best of luck in 2026. I will continue to work tirelessly to increase tourism, create jobs and foster community here in Edmonton, Alberta’s capital city. Thank you to everyone who was involved in this process. “

Prime Minister Justin Trudeau tweeted that he is looking forward to the games. “The #FIFAWorldCup 2026 is coming to Vancouver and Toronto! This marks the first time in history that Canada will host matches for the worldwide tournament – and like so many of you, I can’t wait for the matches to begin”, wrote the Prime Minister.