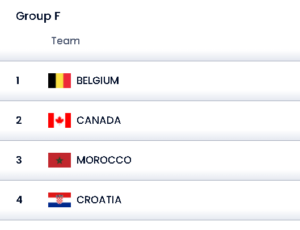 Continuing with the excitement for the World Cup, we thought that the next logical step would be to take a look at group F and meet Canada’s opponents: Croatia, Belgium and Morocco, the top rated team in the past few years and full of experience, making them favorites to win the group.

Belgium has a history with the competition, finishing 4th in 1986 and 3rd in 2018. their third place finish is something to admire as the team has not changed much since that last world cup, meaning Belgium has the know-how to reach the final rounds of the competition.

Belgium are also enjoying their golden generation of players, this is perhaps the best team Belgium has had and the pressure will be on to succeed after a disappointing Euro cup campaign

With champions league winner Thibaut Courtois and other world class players such as Kevin DeBrunye, both players who have won with top teams,  Belgium has the tools they need to go far in the competition and in my mind will use those tools very effectively.