Solved the mystery of the provenance of the gray whale Wally: in a video the images of the specimen

The gray whale sighted in the Mediterranean is a “puppy” and was not born in the Atlantic but in the Pacific, from which it moved away, perhaps ending up getting lost. This is the latest hypothesis formulated by the researchers of the Tethys Institute, who, together with the Italian Coast Guard, were able to establish exactly the size of Wally: this is the name of the gray whale that has been moving in Italian waters for two weeks.

To solve the mystery – the gray whales today live only in the Pacific and Wally had made us hope for a return of the species to reproduce in the Atlantic where it is considered extinct – the exact estimate of the size (and therefore of the age) of the specimen contributed, identified thanks to the use of a drone and the simultaneous flanking of a boat to Wally.

“The length of 7.70 meters confirms that it is a very young animal – explains Sabina Airoldi (in the pic below, on the left) of Tethys – . Also in agreement with overseas experts, Robert Brownell, of NOAA, the US National Oceanic and Atmospheric Administration, and Jorge Urbàn Ramírez of the Autonomous University of Baja California, Mexico, the most accredited hypothesis now is that it is an individual a little over a year old, probably born in the Pacific in January 2020 ”. 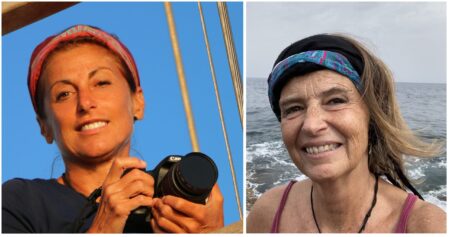 “We think this is an individual a little smaller than the average, who perhaps ate little during the long ‘anomalous’ route from the Pacific to the Mediterranean. In line with this, the underwater images confirm that it is extremely thin – explains Maddalena Jahoda (in the pic above, on the right), also from Tethys – and this raises a lot of concern for its fate ”.

In two weeks, the gray whale (Eschrichtius robustus) traveled over 800 kilometers from Ponza to Imperia, where it was examined by Tethys in the last few hours. “Just this season it urgently needs to stock up on food; the hope is that it will still be able to feed itself even in our unfamiliar waters. It is therefore essential not to cause it further stress ”, warns Sabina Airoldi.

Even the Coast Guard, which monitored the animal’s movements by ‘escorting’ it all along the way (in the pic below), intervened only in the event of real danger (such as the risk of accidental capture in fishing gear). This collaboration also led to the dissemination of a code of conduct for those who spot the animal. The recommendation is to leave it undisturbed, keeping at least 100 meters away without creating crowds of boats. 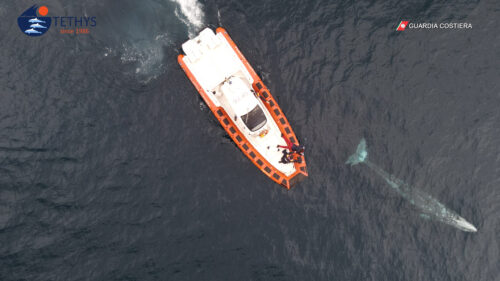 From the reconstructions, Wally has been in the Mediterranean at least since March when it was first sighted off the coast of Morocco and then of Algeria. Then it appeared, from mid-April, in Ponza, then in the Gulf of Naples, in Lazio at the mouth of the Tiber, in Tuscany in Castiglione della Pescaia and Viareggio, and then continued its journey northwards, up to Sestri Levante and then in the Western Liguria. “Always close to the coast, perhaps because it is trying to feed itself” explains Maddalena Jahoda. In fact, gray whales have a peculiarity: they usually do not filter plankton from the water, such as fin whales in the Mediterranean, but sift small crustaceans and other animals from the mud, and typically do so close to the shore, on the shallows.

The annual cycle of the Pacific gray whales is well known and very particular: they spend the winter in the south, in the lagoons of Mexico, to mate and give birth to their young and where they eat little or nothing. After the longest known mammal migration, they reach northern waters, such as Alaska, where they stock up on food.

These days is the first sighting of a gray whale in Italian waters; the only other in the Mediterranean dates back to May 2010 off the coast of Israel and, a few weeks later, near Barcelona. Only one animal has so far been documented in the Atlantic: it was in 2013, near the coast of Namibia. Also for these cases, certainly different individuals, larger than Wally, it was assumed that they had found an ice-free passage in the Arctic.

Tethys researchers, together with several other conservation and research organizations and bodies, have chosen not to disseminate the animal’s position in real time, so as not to attract onlookers by disturbing them. Those who spot it can be of great help by reporting it to the Coast Guard through the “PlasticfreeGC” App to which a new feature has recently been added for reporting large vertebrates at sea by boaters. Or by contacting the nearest Port Authority directly. Let’s save the whale Wally! 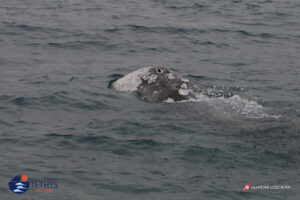 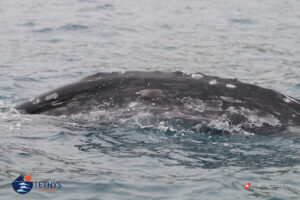