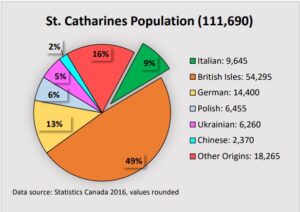 Created in 1967, St. Catharines is a provincial electoral district located in the Niagara Region along the southwestern edge of Lake Ontario. The riding encompasses part of the City of St. Catharines, the largest city in the region. 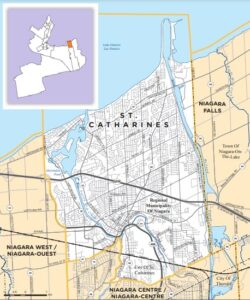 With a population of 111,690, the area was a popular destination for immigrants, primarily those originating from the British Isles and Europe. A substantial portion of the area’s residents were born in countries like the UK, Germany and Italy. In fact, Statistics Canada says 9,645 Italians live in the district; that represents 9% of the population. (See graph at top of the article)

Over the course of its existence, all three major parties have represented the district. Jennie Stevens, the current MPP, represents the riding for the NDP (it has only had three different MPPs). She won the riding over from multi-term Jim Bradley, who held the riding for the Liberals between 1977 and 2018.

This time around, Stevens seeks re-election and will face off with candidates, Ryan Madill for the Liberals and Sal Sorrento for the PC. Like many area residents, Sorrento, who emigrated from Italy with his family when he was young, established roots in the city of St. Catharines. Nigel Oliveira for the Green Party of Ontario, rounds out the list of candidates for the district’s top four political parties.

With less than three weeks to go before the official start of the election campaign, it would appear the political landscape in St. Catharines is poised for change. According to the latest projections by 338Canada.com (April 7), the OLP are in the lead at 32%. The PC, at 31%, trail by only one point, followed by the NDP at 29%. 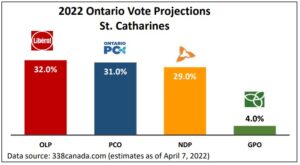 The Corriere reached out to all three parties, but, as at time of going to print, none responded to email requests for comment.