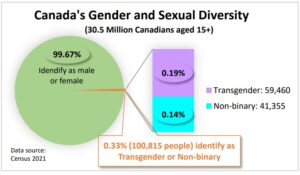 TORONTO – Sometimes, like the Starship Enterprise of the 1970s sci-fi sitcom, a country’s official Statistics gatherer discovers data that supports or disproves long held assumptions. It is an expensive exercise, but at least it offers a “scientific” – numerical basis (justification) – for some public policy developments/responses to a country’s emerging problems.

On April 27, 2022, Statistics Canada released some data, complete with charts and suggestive analysis, accumulated from Census 2021. The format of the Census was the result of “extensive consultation and countrywide engagement with the Canadian population”.

One would expect no less. A census is an information gathering exercise, a photograph, of who (in our case, Canada) lives in the country.

Every five years, citizens and permanent residents participate, by law, in a self-identification exercise. Their willingness to do so is covered by iron-clad privacy protections in law. There are no other “surveys” or “researches” with greater authority or reliability.

Last year, for the very first time, a country (Canada, uniquely in the world) included in its census questions about gender and sex. According to the release, Statistics Canada did so because “prior to the 2021 Census, some individuals indicated that they were not able to see themselves in the two responses of male or female on the existing sex question in the census”.

In short, those individuals no longer wished to be identified anatomically or biologically as they were when they emerged from their mother’s womb as either male or female. Statistics Canada does not appear to have asked why. Why would they? They merely “took a count”.

The flip side of those numbers suggests that 99.67% of the population in Canada has its gender and sex in alignment with that assigned at birth. There are another seven million inhabitants below the age of 15. It is unlikely their numbers would reflect different proportions.

For the sake of comparison (if possible) Statistics Canada references several other “studies” (not Census) conducted in several other Anglo-Saxon societies and Belgium. No where do those surveys reach a level higher than 0.80% (4/5 of one percent), irrespective of how much advocates to the contrary might claim it were so. In any case, in my humble opinion, parents do not love their children less because of any specific attribute.

Woke policy wonks and administrators who concentrate our resources and energies in “transformative agendas” by advocating for surveys in school boards to be filled in the absence of parental guidance should keep the above in mind. Statistics Canada has already given them all the data they need.

There is only one message: get on with teaching skills and civic responsibility. Leave sex and gender to those who assigned it to their children.