Storm, thousands without light: many schools closed in Ontario 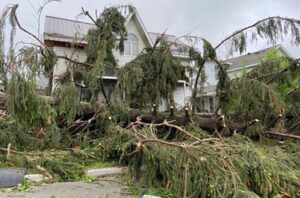 TORONTO – Three days have passed since the storm that brought Ontario and Quebec to their knees, but the inhabitants are still dealing with damage and inconvenience.

In Uxbridge, for example, the local state of emergency remains in place. It could take at least a week before the electricity is restored in some parts of the city devastated by the fury of rain and wind. Winds of up to 132 km/h, trees uprooted, hydroelectric cables torn apart and 10 people dead is the sad toll of the storm that hit all over Ontario for about an hour.

The local authority for electricity, Elexicon, said that up to 5,000 customers are without electricity and there are no guarantees of a speedy reactivation.

Not even the tens of thousands of people in the Ottawa region still without electricity are jumping for joy. This morning Hydro Ottawa reported that over 74,000 people were still without light, meaning that on the previous night the crews managed to bring electricity back to the homes of another 10,000 customers. Overall, Hydro Ottawa has restored electricity to approximately 106,000 customers. “About 40 roads are still impassable because of the trees and hydroelectric lines on the ground,” said Mayor Jim Watson.

This morning the city opened relief centres for people who need electricity, water, food and shelter. And even the schools of the capital, public and Catholic, have remained closed. Today there were still 17 Catholic schools without electricity, 12 fewer than on Monday evening. “We hope that tomorrow most of our students can return to the classroom,” said Ottawa Catholic School Board Director of Education Tom D’Amico.

Eight public schools remained closed in the Durham region, one in Toronto.

The Toronto District School Board confirmed today that all students at AY Jackson Secondary School have been transferred to distance learning. “Since electricity is needed to operate schools safely the decision to close these schools was made to protect the health and safety of students, parents and staff,” said the Durham District School Board. electricity and therefore they are not able to access virtual learning”.”

There were no problems in the schools of the Durham District Catholic School Board that opened their doors regularly.

Today Hydro One teams were committed to restoring electricity in more than 150,000 homes. Meanwhile, in Toronto about 1,700 customers were still in the dark compared to the initial 110,000. “The remaining power outages are generally local in nature, much damage has been caused by trees,” said a Toronto Hydro spokesperson. In some cases, before our crews are able to restore energy, cranes must be used to remove large trees and broken branches.”