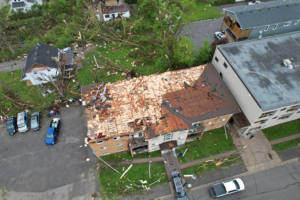 TORONTO – It was not an ordinary storm that hit Ontario last Saturday, devastating some areas of the province and killing ten people.

Environment Canada confirmed today that it was an EF2 tornado that struck with particular violence in Uxbridge destroying homes and leaving thousands of people without electricity.

The national weather agency said data from Western University’s Northern Tornadoes Project officially confirmed that an EF2 tornado has been incorporated into a ‘derecho’, which is a widespread and long-lasting wind storm that forms in a straight line and is associated with a series of thunderstorms. The ‘derecho’ in question, according to Environment Canada, developed near Sarnia on Saturday morning and moved northeast into southern Ontario, hitting Ottawa in the afternoon.

“Violent gusts of wind were reported over a wide swath of southern Ontario during strong thunderstorms – said Environment Canada – after a preliminary analysis of the extensive damage to Uxbridge the Northern Tornadoes Project Team officially confirmed that the EF2 tornado struck around 1:15 on Saturday afternoon with winds reaching a maximum speed of 195 kilometers per hour. “We issued a strong thunderstorm warning, but what really prompted us to make sure those strong thunderstorm warnings were part of Alert Ready was when we saw wind gusts at Kitchener Waterloo Airport reach 132 kilometers per hour,” said Environment Canada Warning Preparedness meteorologist Gerald Cheng.

The violence with which winds and rain hit the province caused the death of 10 people, extensive damage to buildings, uprooting of trees and cut off the supply of electricity to over 1 million customers. For days, crews have been working non-stop to restore power to more than 150,000 Ontario customers as they continue to clean the streets, remove the torn trees and fix the light poles that have fallen under the weight of broken branches. today, Hydro Ottawa said it was working to reactivate electricity to about 65,000 customers.

According to electricity suppliers, it may take a few more days for light to return to homes affected by the violent storm.

Several municipalities, including Whitby, Ajax, Pickering and Uxbridge, have declared a state of emergency. Meanwhile, the affected communities continue to work to be able to return to normal as soon as possible.