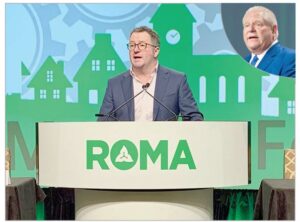 TORONTO – Mayors-“Sheriffs”: the new legislation presented in recent weeks by the Ontario government led by Doug Ford is very concerning to the Association of Municipalities of Ontario (AMO) which is calling for “wide public consultations” before the extension of the powers of the mayors to communities other than those of Toronto and Ottawa for which only, initially, it was foreseen the attribution of greater competences to the first citizens.

The Association declared in fact, on Monday, during a meeting, that “the government should consult the public, as well as professional and municipal political organizations, on various issues relating to the extent of these powers”.

AMO executive director Brian Rosborough said the group was not consulted on the legislation, but was briefed on the details “immediately before” the bill was presented earlier this month. The AMO board met quickly to discuss the bill, but did not have the opportunity to “probe” its members well or research the matter, Rosborough said. “There were people on the board who thought it was a good idea, others who had concerns … but above all there was a broad consensus that a public consultation is needed”.

But what are these new powers to the mayors? The bill would give early citizens of Toronto and Ottawa veto powers over regulations that conflict with “provincial priorities”, primarily housing construction. And that veto could be canceled by the council only with a two-thirds majority of the votes. The bill would also give mayors the responsibility to prepare and present the budget of their city, in place of the council, as well as appoint a head of administration and then hire and fire the heads of the municipal departments, except for statutory posts such as the auditor general, the chief of police or the chief of the fire brigade.

Premier Doug Ford first mentioned such legislation in late July announcing plans to put it in place before the municipal elections on 24 October and later he added that those powers will eventually be extended to the mayors of other municipalities. A decision “dropped from above”, in a way that the AMO does not like at all.

In the pics above: Brian Rosborough, director of AMO, during a meeting of ROMA (Rural Ontario Municipal Association): the photo is taken from the Twitter page of the latter association; on the right, Doug Ford