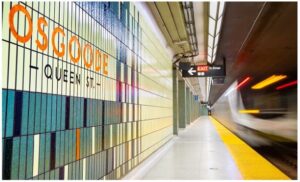 The Toronto Transit Commission said in a news release (June 4) that work accomplished during the three 10-day shutdowns will allow the TTC to eliminate between 75-100 planned weekend closures over the next few years as well as eliminate the need to bypass Museum and Queen’s Park stations for up to two years. END_OF_DOCUMENT_TOKEN_TO_BE_REPLACED