TCDSB: IC, a colossal waste of time and money 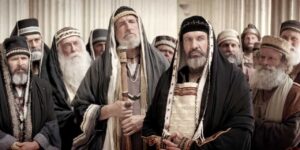 TORONTO – “Pharisees, Scribes and Sinners”. That’s the choice of descriptors used by trustee Nancy Crawford trying to bring her colleagues to their senses, on the issue before the emergency meeting at the Toronto Catholic District School Board, last night. She was invoking the Biblical image of the attempted “stoning of a fallen woman” in an attempt to put issues in perspective and to provide “guidance”.

She could have saved her breath. Despite the efforts and pleading by Trustee Daniel Di Giorgio over the last eight months, the cabal of modern-day Pharisees, wokists (De Domenico, Di Pasquale, Li Preti and Rizzo), who act as if they are the final arbiters of what defines a Catholic school system, were intent on exacting their pound of flesh.

They had help. Pseudo scribes – Director/Secretary Brendan Browne, flanked by legalists from ADR and BLG for the occasion – seemed equally determined “to convict” Di Giorgio for alleged breaches of the Trustee Code of Conduct, truth be damned. Browne had apparently also consulted with another law firm, Aird Berlis.

Just to recap: a former Integrity Commissioner (IC) – yet another lawyer – on the instigation of members of the cabal complainants, produced a rambling report chiding Di Giorgio for allegations of offending them in an interview with the Corriere Canadese. No one contacted the Corriere or its publisher to ascertain such allegations. No one could produce the “offending” online article – because it does not exist. The IC quit in a snit on May 17 (termination date effective June 16). He/they were, in part, upset because Di Giorgio had refused to participate in the investigation. The report was altered on several occasions to suit the need of Pharisees and Scribes.

No problem, said the Scribes, the Report, once submitted, belongs to the Board, presumably to dispense with it according to the timelines prescribed by the Education Act requires, and to do with it as it wishes. But the Director/Secretary Browne is NOT the Board. And, the report for consideration of the Board of Trustees is not the one the IC submitted to its employer, the Board of Trustees.

The report was being used as a political instrument to beat some trustees into submission. The hypocrisy oozed thick, starting with Director/Secretary Browne’s condescending dismissal of Del Grande’s questions pointing to the inconsistencies of the Staff’s responses on the matter.

Moreover, Rizzo and Di Pasquale may not even be eligible to hold office, given that they were not Catholic electors at the time of the last election. Corriere obtained documents from Li Preti’s failed run for provincial office indicating that two senior members of her campaign team may be litigating the Board. In May, she denied it. De Domenico, who has been accused by mothers delegating to the Board of being a misogynist because of his behaviour towards them, has been busy recruiting candidates to run against his colleagues. Several complaints have been registered with the IC against him.

Nancy Crawford, exhibiting a flair for the dramatic by pulling a large rock out of a bag (in the pic above, from the video of the meeting), saying that as a “sinner”, she would not be casting a stone and would support Di Giorgio. Five other trustees agreed and voted to reject the IC report (final vote: 6-4).

Di Pasquale did not even show up. Kennedy, Rizzo, Li Preti and De Domenico made up the group who think of themselves as “without sin”. Not one of the cabal of wokeist troublemakers showed up in person for last night’s meeting. Like me and the legal beagles supporting the scribes, they participated from the comfort of their home.

That cabal and the director/Secretary have been squandering our money and damaging the brand. They should be sent packing.

In the pic above, the “Farisei” (the image is from the website https://gruppo3millennio.altervista.org/farisei-al-tempo-gesu/)