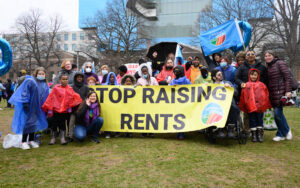 The march will begin at 2pm at 33 King Street and conclude at the constituency office of Ahmed Hussen, Federal Minister of Housing, who supported the construction of 22 John Street with public funding.

“Dream Unlimited, the owner of the two buildings, a development that has received millions of dollars in public funding to build housing on public land, continues to consistently raise rents above guideline,” said Chiara Padovani, the chair of the York South-Weston Tenant Union. “Rents are skyrocketing and people are being forced out of their homes. These buildings are supposed to be models of affordable housing in Toronto but the reality is far different,” Padovani continued. “33 King Street has the largest number of above guideline rent increases in the City of Toronto, while many residents in 22 John Street, a building not protected by rent control, are seeing their rents go up by as much as $100 a month.”

Steeve Martin, a resident of 22 John Street did not know he was not protected by rent control. “My rent has gone up more than I can afford, and I am already paying a really high rent. I’ve seen Dream talk about being committed to this community, if that’s true they should respect the guideline so we can keep a roof over our heads.”

Sharlene Henry, chair of the tenant association at 33 King Street, concurs. “I’ve lived at 33 King Street for 10 years and am trying to raise my family in this community, but it is a constant struggle with above guideline rent increases every single year. Even during the pandemic when rents were supposed to be frozen, they continued to raise our rent above the guideline,” Henry said.

“My neighbours and I deserve access to secure housing but, instead, we we’re being squeezed out of our community,” she added. “Our Member of Parliament in York South-Weston is the Federal Minister of Housing, how can he be letting this happen to tenants in his own backyard?”