Tens of thousands of faithful for a last farewell to Ratzinger: tomorrow the funeral presided by Pope Francis (with a precedent in 1802) 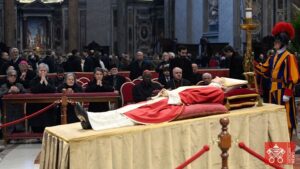 VATICAN CITY – Tomorrow is the day of last farewell to Benedetto XVI, Pope Emeritus Joseph Ratzinger, who passed away on December 31st: at 9.30am Italian time (3.30am in Ontario), the funeral will take place in St. Peter’s Square, presided over by Pope Francis who today, during the general audience, recalled Ratzinger as a “great teacher of catechesis” with “sharp and polite” thinking, then invoking his help to “rediscover in Christ the joy of believing and the hope of living”. Applause and choirs: ‘Benedetto santo subito’ (saint immediately), chanted some of the faithful present.

The celebrant of the funeral, tomorrow, will be Cardinal Giovanni Battista Re, dean of the College of Cardinals. Two official delegations will be present: the Italian one led by Sergio Mattarella and the German one with President Frank-Walter Steinmeier. From Germany there will also be the chancellor Olaf Scholz and the governor of Bavaria Markus Söder. On a personal basis, for Spain, Queen Sofia will be present with Minister Félix Bolaños and the Spanish Ambassador to the Holy See, Isabel Celaa; from Belgium, King Philip and Queen Mathilde; from Poland, President Andrzej Duda; from Portugal, President Marcelo Nuno Duarte Rebelo de Sousa; from Hungary, President Katalin Novák, while from France there will be the minister Gérard Darmanin. But the list is very long and there will also be many faithful: the Prefecture of Rome had estimated attendance at the funeral at around 65 thousand people but, according to the influx in the three days of vigil – with almost 200 thousand faithful who in three days (from 2 morning to 4 evening, in the morning and in the afternoon) paid homage to Benedetto XVI in the Basilica – the number seems destined to grow significantly. Of course, the number of 200 thousand faithful visiting the body disappears when compared to the 3 million people who paid homage to Pope Woytila, but it is also true that Giovanni Paolo II – exposed for four days even at night – was a pontiff in office and, above all, he was the most loved Pope ever.

After the visits ended today, the body of Benedetto XVI was placed in a cypress coffin – closed with the seals of the apostolic chamber – which will be placed inside a second zinc coffin, then welded and sealed, in turn placed in a wooden box which will then be buried. Medals, coins minted during the Pontificate, pallias – liturgical vestments – and finally the ‘Rogito’, a short text describing the Pope’s Pontificate, will be enclosed inside a metal cylinder and buried together with Ratzinger’s body.

The coffin will leave the Basilica around 8.50 tomorrow morning to allow the faithful to say the rosary, then the liturgy will be held and, after the Eucharistic Celebration, the Ultima Commendatio (last recommendation) and the Valedictio (farewell) will take place (the Catholic rites preceding burial). After the liturgy, the remains of the Pope Emeritus will be taken to the Vatican grottoes for burial in what was once the niche of Giovanni Paolo II, Pope Wojtyla.

The funeral service for Benedetto XVI will roughly follow that reserved for a pontiff in office, with some modifications, as specified by the director of the Santa Sede press office, Matteo Bruni. “The basis is that – he underlined – with some original elements, adaptations due to the particularity of the situation, others missing, proper to the reigning Pontiff”. All the preparation for the Eucharistic celebration was the result of teamwork by the pontifical masters of ceremonies who took into account the thought of the Pope in office, Francis, who will preside over the Mass (pronouncing the Omelia) while on the altar, to celebrate, there will be – we said – Cardinal Giovanni Battista Re.

That of the Pope presiding over the funeral of another Pope is not an absolute novelty in the history of the Church: as Vatican News explained (here) it already happened in February 1802, with the solemn funeral of Pio VI, celebrated in St. Peter’s Basilica by his successor Pio VII. The deceased, elected pontiff in 1775, died after a long reign in exile in France, prisoner of Napoleon. The funeral took place in Valence immediately after his death, but his successor Pio VII, elected on 14 March 1800, wanted the remains of his predecessor back in Rome: Pio VI’s body was exhumed in December 1801 and traveled from Valence to Rome where in February 1802 the solemn funeral ceremony took place in St. Peter’s in the presence of Pope Pio VII.

Tomorrow, through the website of the Italian newspaper Corriere Canadese  (www.corriere.com), it will be possible to follow the live streaming of the funeral.

In the pic above, the homage of the faithful to the body of Pope Ratzinger (photo from Twitter @VaticanNews)