Thank people who stay true to their word 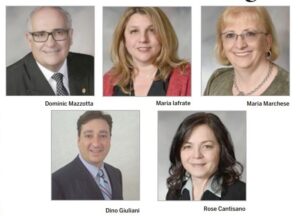 TORONTO – Last week, Corriere Canadese interviewed five York Catholic District School Board (YCDSB) trustees: Rose Cantisano, Dino Giuliani, Maria Iafrate, Maria Marchese and Domenic Mazzotta. All of them of Italian background, although only one was born outside of Canada. They had had enough of the not-so-subtle, often overt, discrimination to which they were being subjected because of their “ethnicity”.

They ‘vowed’ to bring the business of the YCDSB to a standstill by staying away from Board meetings, depriving the assembly of its required quorum to receive reports, debate them, authorize expenditures, pay outstanding board invoices, accept negotiated teacher and other education workers contracts, plan for school opening, staff allocations and anything else that the Education Act would require diligent trustees to exercise.

An undercurrent of counterculture, wokist secularism was increasingly seeping through the Board. From the demands that ‘land acknowledgement’ take precedence over prayer to start meetings in a Catholic Board, to overt resentment that ethnic Italian Catholics could and did succeed despite all obstacles, the Five decided to push back.

Matters were brought to a critical point when fellow trustee Theresa Mc Nicol, in early June, issued a series of emails essentially equating them to underworld American stereotypes and suggesting that the police provide security at future Board meetings. On July 3, trustee Mc Nicol invited the Corriere, via email, to attend the upcoming August 30 Board meeting to reveal a major “cover-up”, reminding us that this is an election year.

The Five’s patience and tolerance for the innuendo and insinuation came to an end. They appealed to the Director, the Chair, the Ministry and the Minister – before they spoke to the Corriere – to deal with the issues publicly in an open meeting of the Board. The Corriere, sent emails to the Chair, Director, Minister Lecce and the Deputy Minister’s office.

This latter group are all part of the problem, in ethics and in law. Chair Crowe could have nipped everything in the bud by convening a public meeting of the Board to air differences and resolve issues publicly – with facts. She answered well past our deadline and demanded we print her generic, evasive response in its entirety. We do not work for her.

Now the Five will no longer work with her and her enablers, trustees Cotton, Mc Nicol and Wigston. Four of the Five will not seek re-election. All of them will still hold office until their replacements are sworn in next November. None of them will attend Board meetings until the Chair agrees to have their complaints addressed in public.

There will be no quorum as a result. Minister Lecce will have to finally reveal himself.

Candidates have emerged to challenge Mc Nicol, Cotton, Crowe and Wigston (the other trustees) and their flaccid support for their Constitutional mandate. If they cannot manage being Catholic, they can seek election to the public Board – nothing stops them from doing that.

The Five, on the other hand, put their personal and family reputations on the line to preserve and promote a Catholic, family culture as their oath of office obliges them to do. Surprised? Catholic schools exist because the British North America Act, 1867 (Modern day Constitution Act, 1982) enshrined them in the contract – Constitution – as a precondition to the creation of Canada.

These schools were, and are, a guarantee to Catholic families that their values, embodied in religious tenets, informed by a corpus of experiences and expressed ideologies tested by life and interpreted by the magisterium (the Church) would be free from discrimination and persecution.

Imagine, in 2022, the people who are the raison d’etre of the Catholic system being the objects of discrimination and exclusion from their own home. Too bad Rose Cantisano, Dino Giuliani, Maria Marchese and Domenic Mazzotta have had to take these drastic steps. They will deserve the thanks of all for their courage and endurance.

It will be up to Maria Iafrate and whoever replaces the counterculture wokists to carry on the defense and promotion of what legally belongs to Catholic families in York region and elsewhere. Cotton, Crowe, Mc Nicol and Wigston should do the honourable thing and withdraw from the election.