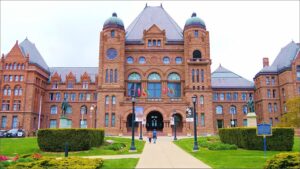 TORONTO – Election campaign kicks off in Ontario. With the dissolution of the provincial assembly, requested today by outgoing Prime Minister Doug Ford during his meeting with Deputy Governor Elizabeth Dowdeswell, the countdown has officially started in view of the appointment at the polls on June 2nd. Of course, the start set for today is a purely formal element. In fact, both the majority party – the Progressive Conservative – and the opposition forces began their election campaign as early as last month. Just think that only last week Steven Del Duca’s Liberal Party and Andra Horwath’s NDP presented the entire programmatic platform for the next provincial elections.

And the Conservatives last Thursday presented at Queen’s Park the Budget 2022, a financial maneuver that remains simply on paper, because the provincial parliament was first updated sine die and then dissolved without there being a possibility of putting the budget law to a vote. That’s why the provincial budget, which brings with it a record spending plan of almost 200 billion dollars, has become the electoral program of Ford’s party.

But what is the real situation at the starting blocks? To give us a hand are the polls carried out in recent weeks that are able to provide us with a fairly faithful snapshot of the balance of power between the parties and the level of consensus of the political forces that will face each other at the polls next month.

At this stage the party to beat is the Progressive Conservative, which collects the relative majority of voting intentions and which is definitely aiming for an encore after the overflowing victory in the provincial elections of 2018. The latest poll, carried out in late April by Mainstreet Research, places Ford’s conservatives at 38.1 percent. A level of consensus, the one certified by this polling study, which would almost certainly guarantee the Tories to win once again, bringing to Queen’s Park the absolute majority of the deputies.

Right now the main obstacle for a possible Ford bis led by Ontario is represented by the Liberal Party, which after a muted start is gaining ground against the other center-left formation – the NDP – and which is running for a leading role in the elections. According to Mainstreet Research, if the vote were to be held right now, the Liberals would rise to 30.4 percent: this is a good starting point, with the gap that divides them from the Conservatives reduced to 7.7 percent and with encouraging margins for growth in the coming weeks.

At the beginning of April the gap between the Progressive Conservative and the Liberal Party, again according to Mainstreet Research, was 13.4 percent: in less than a month there was a comeback, it remains to be seen if this trend is destined to continue or if instead the enlargement of the electorate willing to vote grit has now reached its maximum potential.

Not too flattering, however, the situation of the NDP. Horwath, leader of the party since 2009, led the Neo-Democrats in three elections – 2011, 2014 and 2018 – losing on every occasion. According to Mainstreet Research, the NDP is currently at 18.1 percent, far behind both the Conservatives – who would have more than twice as many votes – and the Liberals.

At this stage, therefore, it is necessary to change gears immediately, regain lost ground and enlarge one’s traditional electorate. It seems light years have passed since a Poll by Angus Reid on January 6 gave the Horwath party 36 percent of voting intentions, compared to 33 percent for conservatives and 19 percent for liberals. From that moment on, in all the surveys carried out, the Ndp lost ground.

Finally, Mike Schreiner’s Green Party is also running for June 2: according to Mainstreet Research, the Greens are stuck at 5.1 percent, while as regards the seats, environmentalists should reconfirm only one deputy in Queen’s Park.