The pandemic’s impact on immigration and international students 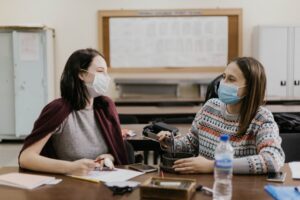 Immigration is the key to economic growth in Canada. With the nation’s fertility rate on a steady decline, the Canadian government maintains that immigration is key to replenishing the population. It estimates that 75% of the country’s population growth is attributable to immigration.

Part of that growth is generated through international students. According to a Statistics Canada report (June 2021), about six in ten first-time study permit holders who worked throughout their duration of study or post graduation become permanent residents.

With more than 280 post secondary educational institutions to choose from, Canada offers an abundance of options for students to receive a high-quality education. That also means a big opportunity for economic growth.
Over the years, international student enrollment in post-secondary institutions has been on the rise. According to Immigration, Refugees and Citizenship Canada (IRCC), the number of study permit holders increased from 122,700 in 2000, to 642,500 in 2019.

However, pandemic induced restrictions and border closures have had a direct impact on students’ ability to travel between their home countries and study destinations. Some do not come back. By the end of 2020, IRCC data suggests that only 530,540 international students held study permits in Canada. That reflects a 17% decrease compared to 2019.

Furthermore, that represents the first decline in Canadian foreign student enrolment over the last twenty years. The data for 2020 and 2021 will likely reflect lower numbers still.

Most recently, the highest concentration of international study permit holders is among those originating from India, at 34% of the total, followed by China at 22%. Those who come from European countries are well down the list. Students from France, for example, represent a meagre 3% of foreign students in Canada. Those flowing from Italy, according to the most recent data, number only 3,095 in 2018 – only about half a percent of the total international student profile.

The drop in numbers during 2020 was led by India, with a surprising 38,515 fewer students, followed by China (-23,840) and France (-5,595). That is a substantial hit for the post secondary public education sector in Canada.
Canadian universities and colleges reported about $40 Billion (B) in annual revenues for 2019/2020, according to Statistics Canada. Federal and Provincial governments are the main source of revenues, 47% of the total.

Over the last decade, post-secondary institutions have increasingly relied on tuition fees as a main source of revenue. The loss of close to 112,000 foreign students in one year represents a potential loss of $3.8 B in revenue. That is 10% of their annual revenues.

This loss may have greater implications not only for the education sector, but for the entire economy. According to Global Affairs Canada, in 2018, spending associated with international students studying in Canada contributed an estimated $21.6 B to the national GDP. Furthermore, foreign students may be key to helping Canada’s skilled labour shortage. Given their training in fields of science, technology, engineering and mathematics, combined with their desire to make Canada their new home, growing the international education sector could prove beneficial for Canada.

The challenge for the Canadian government is to adapt and develop future policies that strengthen Canada as an international education destination. As a start, over the next five years (2019-2024), Canada’s International Education Strategy aims to diversify the education sector by broadening the range of countries from which to attract international students to Canada.

Ontario: another 38 dead and over 4 thousand in hospitals. 4-year-old girl dies of Covid-19 in Quebec