The Rising Food Prices during this Pandemic 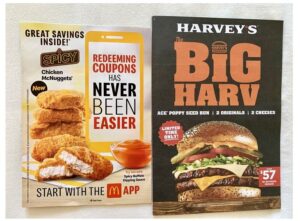 TORONTO – A friend once commented on the price of a Big Mac, that if you eat it regularly, like once a week, you don’t notice the price increase because it’s in the cents. But, if you order it, say, once every six months, or in my case, in a gap of almost two years because of the pandemic, you feel the crunch, as I did when I ordered two Big Mac meals three weeks ago. I paid $23 and some cents! My friend then added, it’s good if you have the coupon because you pay just a little over half of the regular price. The question that begs answering is, how often does Big Mac come up with coupons.

In his article of August 18, 2021, Saif Kaisar of City News Everywhere wrote about grocery prices slowly increasing, with a family of four paying around $800 more a year for food. Professor Sylvain Charlebois of the Agri Food Analytics Lab at Dalhousie University in Halifax affirmed this observation in a statement, “We’re seeing a lot of pressure points that could make everything in our economy more expensive.”, making life tougher in the coming fall and winter. Not that nice an outlook as we head into colder months with Covid 19 and its variants, notably the Delta, still around.

LowestRates.ca quotes an estimate of how much living in Toronto costs in one month in 2021: $3,008.74, but issues a disclaimer saying that it’s possible that Torontonians can live on less or more, depending on their lifestyle. I myself live in the downtown core and in a rather frugal manner. But this me. Some Torontonians like to spend their money, pandemic or no pandemic. And I respect that.

Josh Rubin, a business reporter for Toronto Star, writes in his August 20th, 2021, article about “The Affordability Crisis: Why is Everything Suddenly Getting so Expensive ….”. The article touches on housing and what politicians can do about it. I’m not an expert on this but the way I see it, the issue is more of a provincial and municipal concern than a federal one, as Mike Moffat, assistant Professor of business, economics and public policy, Western University, states, “There’s a limit, especially for the federal government. Most of the policy levers for making housing more affordable that we do have are at the provincial and municipal level.”.

Pedro Antunes, chief economist at the Conference Board of Canada, sees a further angle to the rising prices. He observes the tight supply and excess demand as one cause, though noted that despite COVID recession, Canadian incomes have held up relatively well – incomes earned while working from home. Canadians want to spend their money yet are faced with high prices and lack of supply on some items. Antunes mentions specifically China’s container shortage as one cause for this imbalance in supply and demand. Let’s face it – in the last two decades, we have been buying products made in China, from clothes, shoes, furniture, cooking pots and pans, lighting fixtures, etc. We do this because they come cheap and are available, not that they’re always durable.

When I first moved here, anything that broke down at home was blamed on Taiwan because that’s where the item came from. Now it’s China which is the source of most items seen in the store. The Suez Canal blockage early this year affecting trade between Europe, Asia and North America as well as Covid-related closures of key ports in China, as mentioned by Peter S. Goodman and Keith Bradsher in the New York Times article dated August 30th, 2021, “The World is a still Short of Everything. Get Used to It”, contributed to this economic condition. It’s what I refer to as the trickle-down effect and we will be experiencing this in the coming cold months. It’s basic economics: when demand exceeds supply, the result will be higher prices.

Personally, I find my supermarket runs getting more expensive. I’ve stopped buying beef a long time ago. At first I wanted to avoid contracting mad cow disease. When that news died down, I found beef prices to be pricey. Add to that the risk of red meat to one’s health. Mad cow disease disenchanted dairy farmers, some of whom had to put down their livestock when inspection showed even just one cow carrying the disease.

Hence, there are fewer dairy farmers now in Canada than when I first arrived here in the 70s, which explains the rather high price of steak, for example. Since my move to this country, I’ve shied away from canned goods. Now, however, I find myself eating canned sardines more often than I used to because I’ve discovered that it’s not only good for me in my senior years but also reasonably priced and accessible in all supermarkets I visit.

I’ve added seafood to my diet, mostly shrimp and fish caught in Canadian lakes. And, I make it a point to add fresh vegetables daily in my diet though nowadays, I find myself opting for frozen ones but I get the ones packaged in Ontario. I notice that Canada has become good at freezing its vegetables, especially Ontario, whose soil is dormant for about six months while we are in the late fall, winter and early spring.

This pandemic has changed not just my attitude in life but also my choice of food, though sometimes, I find my choices ruining my monthly budget. There’s no question though: I’d rather scrimp on other things than on food. I just wish their prices would stop increasing. After all, it’s one of the basic necessities of life alongside water, air, and shelter.

In the pic, coupon books for Big Mac and Harvey’s burgers

Carpenters Union picket at Woodbine Racetrack and Casino: the strike goes on