Tomorrow no Good Friday procession in College, the disappointed community wonders why 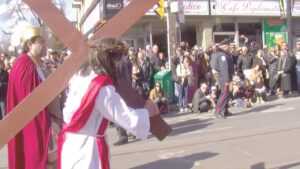 TORONTO – The reactions were not long in coming. The news published by the Corriere Canadese that also this year in College there will be no Good Friday procession, was not welcomed with pleasure by the Italian community and even, for example, by the Portuguese one. The comments to our online article were really numerous. An avalanche.

The Portugueses en Toronto group, for example, shared the article on their Facebook profile. “But why? It’s really sad,” wrote Fernanda Medeiros. “So sad,” Ma Nu Almeida added. “Really disappointed”, said Lucia Catania while wondering the reason for the cancellation of the procession organized by the Church of St. Francis of Assisi in Toronto, is also Liliana Izzo: “But why?” she asks.

Concetta Silipo and Francesca Pettè summarize their state of mind in one word: “Amen”. There is no need to add anything else to express the disappointment felt after discovering that the procession will not take place for the third consecutive year. Francesca Maria Natale Giovanna Da Polenta, with a bit of sarcasm comments “Instead the gatherings for the protests …”.

With a few words and many emojis, the people disappointed to learn that today the Way of the Cross will not parade through the streets of College, have expressed all their disappointment and their bitterness. But there are also those who, like Jorge da Costa, wanted to post a real outburst. “This year all the fashion shows will take place… all parades are allowed. But we must not blame the city, we must not blame the province, we must blame the Archdiocese of Toronto that controls every parish … It is sad that the St. Patrick’s parade was organized. Why did the Roman Catholic Church make this decision?”