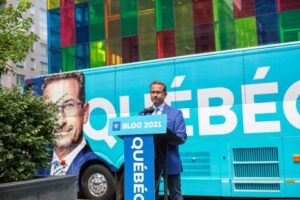 TORONTO – There’s no need to wait until the “other debates” next week to determine who will win the election campaign. As far as the debate reserved for the all-important Quebecois constituency is concerned all the issues have been resolved. Nothing else needs to be said or heard.

The Bloc Quebecois succeeded in setting the ground rules; the other parties scrambled over themselves to fall into line. The country – Canada – at its very best can only be an “equal partner” to the “nations” co-habiting under its [shrinking] umbrella. La Nation Quebecoise (population: 5.5 million) is the largest in a territory (Canada) hosting some 700 aboriginal and equal nations. There are no others.

It is an old theme. Consequently, the election platform of any substance must invariably be about (a) increasing the amount of money transferred (!) to another jurisdiction and (b) who should establish goals and conditions for the spending of those sums – no matter the program under which they might be transferred.

To be crass: “gimme and get out of the way”. The Bloc’s Yves-Francois Blanchet was, regrettably, eloquent in his simplicity by asking how bureaucrats in Ottawa can claim to be more effective in identifying and resolving the issues immediate to the Quebecois than their own National government. Economic, social and international policies fall conveniently, and subserviently, within that rhetorical question.

With their responses and their performances, the others bought into the “legitimacy” of that premise. Yet, by definition, a federal campaign encompasses the common interests of Canadians from sea to sea to sea. So much for that theme – “Game over” for substance.

After trading barbs about the handling of the pandemic, the timing of the election and dutifully expressing emotional compassionate concern for the religious revolt in Afghanistan, they ended their debate. At least the Quebecois now know they have left their mark on the aspirants to power.