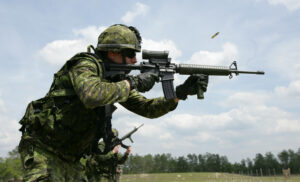 TORONTO – Canada must increase its military spending until it reaches its NATO agreement quota. This was requested today by the Conservative Party, on the eve of the presentation of the federal budget scheduled for tomorrow at the House of Commons. Kerry-Lynne Findlay, conservative shadow Defence minister, said: “It is time for Canada to contribute its fair share to NATO. As a founding member of the Atlantic Alliance, the peace and security that Canadians have enjoyed over the past 73 years have been underpinned by the collective security promise that any attack on a NATO country would be an attack on everyone.”

“However, out of 30 NATO countries, Canada ranks 25th in terms of military spending. The latest annual report released by NATO shows that Canada spent only 1.36% of its gross domestic product on the military in 2021, well below the 2% of GDP agreed by NATO leaders. This is why the Conservatives are calling on the Liberal NDP government to increase national defence spending to at least 2 per cent of Canada’s GDP, in accordance with NATO’s 2014 Wales Summit Declaration.”

“With the escalation of the war in Ukraine and threats to our national security around the world, conservatives want to see a budget that ensures Canada re-establishes its position as a trusted global security partner and a reliable member of NATO. The government has the opportunity to show Canadians that they take our commitment to NATO seriously by supporting our conservative motion and committing in their next budget to provide the women and men of the Canadian Armed Forces with the resources they need.”

The position taken by the conservatives puts their finger in the fold, in the only area where the legislature pact between the Liberal Party and the neo-democrats could really wobble, namely that of military spending.

In recent weeks, in fact, ministers Chrystia Freeland, Anita Anand and Melanie Joly have confirmed on several occasions that the Liberal executive intends to increase the appropriations for Defense, placing itself in substance in a position very similar to that of the Conservatives.

The NDP, on the contrary, has always been in favor of a reduction in military spending, in order to allocate more resources to social programs and policies for the benefit of the less well-off sections of the Canadian population. Last week, precisely on this point, the Ndippino leader Jagmeet Singh was quite vague: on the one hand he confirmed the opposition of the NDP to increase military spending, on the other hand, however, he stressed the need to support Ukraine in the face of the Russian invasion.

It therefore remains to be seen to what extent the measures relating to military expenditure that will be present in this year’s financial maneuver will find the support of the NDP.

Also because we are facing very high figures. Currently Canada – as also reiterated by the Conservatives – allocates 1.36 percent of its Gross Domestic Product to Defense, with the aim of reaching 2 percent in the not too distant future. According to a report by Parliamentary Budget Officer Yves Giroux, reaching 2 percent of Canada’s GDP would translate into spending between $20 billion and $25 billion a year.

The NDP, signing the legislature pact, committed itself 2 weeks ago not to vote no confidence and to pass the government’s budget laws until June 2025, when this legislature will be at the end: the increase in military spending represents a significant obstacle on the stability of the agreement.