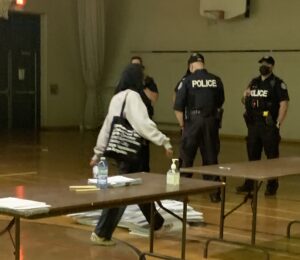 TORONTO – Federal elections: two “big words” that would suggest a great, impeccable organization. Not so much, really, listening to the testimonies coming from the polling stations after Monday’s vote. This is the case of the York Humber High School seat at 100 Emmett Avenue, York, in Toronto. A scrutineer, who contacted the editorial staff of the Italian newspaper Corriere Canadese and also sent photographic documentation to support her story, describes a situation of total chaos.

“Everyone, inside the polling station, used their mobile phones – she says – and, in particular, the scrutiners of the Liberal Party, eight people in all, used them. One of this scrutiners, in station 433, after 9.30 pm went out several times from the polling station to make phone calls while another, from station 432, was even taking photos of the electoral books after 9.30 pm”. But it doesn’t stop here. “At 9pm, I saw two NDP scrutiners wearing party t-shirts with the candidate’s name inside the voting station” (in the pic below). 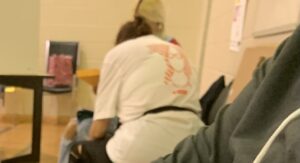 The scrutineer also reports problems related to the correct conduct of the vote. “Most of the ballot boxes were unsealed,” she says. And she adds: “Some people went out after 21.30 to take some family members and let them enter the polling station. But is all this legal?”.

As if that weren’t enough, at 10.25pm the school staff entered the room where the ballot was just started, and around 11.30pm the same school staff asked everyone to leave. “The heads of the polling station asked us if we agreed to finish counting the votes at the ‘headquarters’, but we refused the proposal because we were halfway through the counting of the votes”.

In short, a situation of chaos, as we said, to the point that the police also intervened (in the pic at the top). “Is such a vote legal?” asks the scrutineer.