Toronto recognized as one of the world’s most honest places 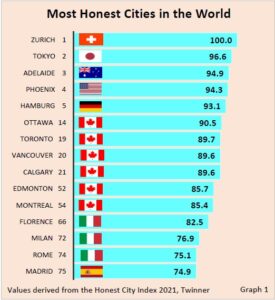 Sometimes in life, one must learn to trust. It may be easier said than done. As with respect, trust is a commodity that is earned. Fortunately for Torontonians, that trust may be easier to earn as Toronto ranks among the most honest cities in the world.

Twinner, an automotive company, commissioned a study designed to identify which global cities rank among the most honest and trustworthy. The findings, released July 2021, name three Canadian metropolises within the top twenty, the nation’s capital – Ottawa at #14, followed by Toronto at #19 and Vancouver at #20.

At the top of the list, Zurich, Switzerland was recognized as the world’s most honest city. Tokyo, Japan and Adelaide, Australia round out the top three spots, (see graph above). According to the Honest City Index, the three most trustworthy Italian cities include Florence (#66), Milan (#72) and Rome (#74).

Honesty involves several elements including ethics, integrity and transparency. Many of these prove a challenge to measure and quantify. However, researchers devised a strategy to evaluate and score several categories to come up with a ranking system. A score of 100 being the best possible score and 50 being the lowest.

Starting out with 350 major cities around the world, the study narrowed the scope and published the results of the top 75. They were evaluated on factors including civic honesty, transparency in government, society and economy as well as the perception of theft by local citizens.

The study also considered car dealer reviews for each city, a component worth examining as “there tends to be some perception that used-car dealers are dishonest”, said Silvan Cloud Rath, CEO of Twinner.

Overall, study organizers gained insight in customer perceptions towards used car markets and ways to improve upon honesty and transparency. The study also provided a better understanding in the connection between citizens and their trust in government and society.

In any community, trust in government is an important quality. Using data on corruption, budget transparency and electoral integrity helped determine the perceived level of government trustworthiness. With scores of 90.7, Ottawa and two other Canadian cities, Calgary and Edmonton ranked well in that category.

Noticeably absent from the Honest City Index was the City of Vaughan. When contacted for comment, a spokesperson for the Mayor Maurizio Bevilacqua insisted that, “the City is unwavering in its commitment to deliver honest, accountable and transparent government”.

While the study did not focus on issues related to the public health crisis, other polls suggest the Covid-19 pandemic has eroded Canadians trust in their government. According to one Leger survey (May 2021), roughly 60% of Canadians reported a significant erosion of trust in both provincial and federal levels of government. Perhaps not the greatest of sentiments as Canada inches closer to a Federal election.

As the saying goes, “lead by example”. In this fashion, those at the top who demonstrate trustworthy traits may result in a trickle-down effect throughout the rest of society.