Toronto’s Bay Street bus station is going down in history 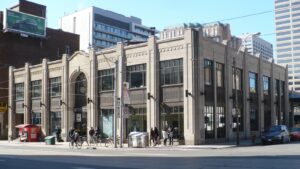 The days of Toronto’s historic bus terminal and intercity bus hub are over.

The Toronto Coach Terminal was the bus terminal for intercity connections to Toronto, located at 610 Bay Street downtown.

The building, built 90 years ago in Art Deco style, located between Bay and Dundas Streets, served bus connections to and from Toronto. The building, which is owned by TCTI (Toronto Coach Terminal Inc.), a subsidiary of TTC (Toronto Transit Commission), may be handed over to the City of Toronto and redeveloped in the near future.

The bus station opened in 1931 as the Gray Coach Terminal and was an intercity hub for the Gray Coach line that was then owned by TTC. The station building replaced the former open-air bus depot.

The Art Deco building was designed by British-Canadian architect Charles Dolphin, who was also responsible for the Canada Post Delivery Building in Toronto, parts of which today form the facade of the Scotiabank Arena.

Jamie Bradburn, a writer and historian, said the terminal was built at a time when the city was investing in stately transport buildings such as Union Station, which had opened four years earlier. With its stately staircase and stylish lighting fixtures, the bus station was an impressive welcome to those arriving in the city.

The current main tenant and station operator, Greyhound Canada suspended operations in May 2020 due to the Covid-19 pandemic, and on May 17, 2021, announced that it would end its operations in Canada for good. Other bus operators Coach Canada / Megabus moved to a new bus station, Union Station Bus Terminal, on June 8, 2021. The only and last bus operator – the Ontario Northland Motor Coach using the Toronto Coach Terminal on Bay Street will officially move to the new station on June 27, 2021, thus contributing to the end of the role of a bus station after 90 years of its operation.

Neither the management company and the owner of the station building – TTCI nor TTC currently have an idea or plan for its functionality, after it has already been completely abandoned.

TTCI plans to hand over the building to the Toronto City Council. In return, it will receive $ 4.2 million from the city to pay off the loan it took out from TTC. However, it seems that the amount mentioned is significantly lower than the market value of the building and land.

It is not known what the city of Toronto will decide to use the old, historic station building for. The functions that a building can take over include affordable housing, employment uses or community infrastructure. According to municipal regulations, the surplus land is managed by the municipal real estate agency CreateTO.

Nearby landmarks include the Toronto Eaton Center, the Atrium on Bay, the Hospital for Sick Children, and Toronto City Hall with Nathan Phillips Square. The station building is also within walking distance of Chinatown.