Transparency and trust, values with less weight at the TCDSB 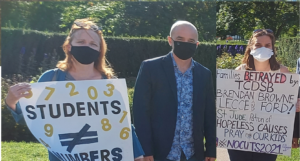 Some of the most valued drivers of human behaviour include family, community, trust[worthiness] and education. The last two can have a significant impact on society as a whole. Families, who entrust their children to the publicly funded education system expect a level of transparency and trust[worthiness] from those responsible for delivering a quality education in a safe environment.

Lately, transparency appears to be of lesser importance when it comes to the “powers to be” in educational bureaucracies. Parents and community members have expressed concern over the reorganization of classes, the mixing of cohorts, the placing of more students in the classroom, all of which can lead to an increased risk of exposure to Covid-19.

Parents of children in the Toronto Catholic District School Board (TCDSB) feel that the Board appears to prioritize financial prudence over the safety of students and staff. Some have even suggested the Board failed to plan appropriately for the 2021-2022 school year to avoid further disruption among classes and cohorts.

If their concerns fall on deaf ears at the Board, those responsible for the appropriate staffing decisions to meet class size requirements, how can parents trust where the Board’s real interests lie.

Last Spring, the TCDSB projected a decrease of some 3,500+ students for the 2021-2022 school year. Student enrolment was projected at 60,830 elementary students and 26,826 secondary students. Now, more than five weeks beyond the start of this academic year, the TCDSB refuses to publicly disclose the current number of students enrolled.

At the risk of sounding repetitive, the TCDSB still refuses to disclose the current number of “surplused” teachers. There is a sizeable dollar impact associated with the difference between projections and real numbers.

Any decrease in student enrolment directly impacts the Grants for Student Needs (GSN) and consequent funding for staffing levels. The GSN is currently pegged at roughly $12,000 per student. In addition, the Ministry allocates a further 20% of GSN (estimated $2,400) per student for capital upgrades and expenditures to bring the real GSN to a combined total of $14,400 per student.

Let’s work in reverse to understand the problem posed by decreased enrolment and the “symptom” of “surplused” teachers.

With an estimated 3,500 fewer students, lost GSN funding per student, adds up to more than $42 million in less spending for the Board. Add to that shortfall the additional 20% ($8.4 million in capital improvements) and the TCDSB would need to find approximately $50 million somewhere to operate in person classes at the same level it did pre-Covid.

The problem may be worse. That would explain why “Board officials” do not respond to email requests for information. It may also explain the signs by parents demonstrating against the Director Brendan Browne and the TCDSB before Queen’s Park the other day.

It does not explain why a Trustee, Norm Di Pasquale, of that same Board would proudly stand with parents holding those signs. In gross political terms, he appears to be inhaling and exhaling simultaneously. It conjures the image of “biting the hand that feeds you”. Surely, he must be in breach of Code of Conduct.

Someone has broken trust. What were the Trustees and the Director doing during the month of August when they had the preliminary numbers for September?