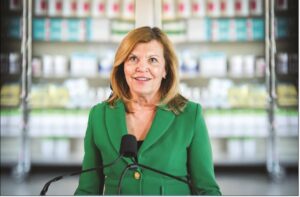 Breakthrough in the administration of vaccines: all people over the age of 18 will be able to book an appointment to be immunized against Covid-19 by May 24th through the portal of the province. Health Minister Christine Elliott announced it at a conference yesterday.

News that has been long-awaited and that has come unexpectedly. The eligible age for using the provincial reservation system will drop to 55+ tomorrow, 50+ in the week of May 3, 40+ in the week of May 10, 30+ by the week of May 17 to 18 years old by the week of May 24. “Starting next week, Ontario residents will begin to receive a higher supply of vaccines from the federal government. This is exciting news. The way out of the pandemic is vaccines and the light at the end of the tunnel becomes more alive every day – said the minister – but until most residents have received both doses of the vaccine, we must continue to follow the public health measures that, as we know, work”.

Essential workers were divided into two groups. The first group, which includes all teachers and education workers, agricultural workers, first responders, government labour and building inspectors, workers from food production and distribution centres, will be able to book appointments as early as next week. On 10 May, however, it will be the turn of the second tranche of essential workers, including truck drivers, electrical workers, retail and production workers, restaurant employees, judicial system employees, social workers and health workers.

The revolution in the vaccination campaign came thanks to a substantial increase in the supply of vaccines in the coming weeks that will allow 50% of all incoming doses to be transferred to the districts most affected by the virus in May. From the end of May to June, in particular, half a million Pfizer-BioNTech doses will arrive in Ontario.

The province says it will receive nearly 800,000 doses of the Pfizer-BioNTech vaccine for each week of May, which will increase to 940,000 per week in June. And another shipment of 388,000 doses of the Moderna vaccine will arrive on May 10. Not to mention the doses of the Johnson & Johnson vaccine, of which 300 thousand doses have arrived in Canada, 116 thousand of which will probably be destined for Ontario.

The priority then becomes to speed up administration: the significant increase in vaccine supplies means that the province’s original goal of inoculating at least one dose to 75% of adults by June 21 is “feasible and possibly, even exceedable”.

In order to administer another million doses to residents and workers in hot spots, half of the doses received by the province between May 3 and 17 will be sent to 114 high-risk neighbourhoods indicated by the postcodes.

Meanwhile, starting today, 16 pharmacies in the province will begin administering doses of Pfizer to individuals 55 years of age or older: eight of the pharmacies are located in the Peel Region and eight in Toronto. Each pharmacy will receive about 150 doses per week during the pilot project which will last three weeks.